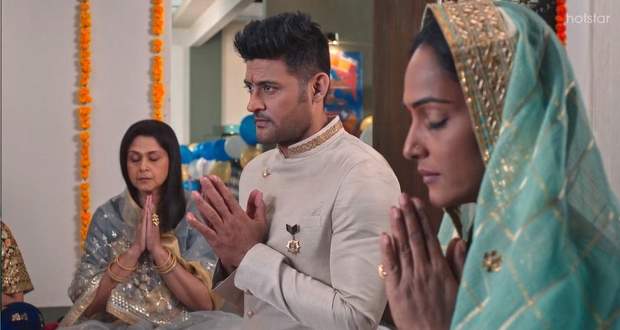 In the forthcoming episodes of Star Plus’s serial Shadi Mubarak, Preeti and K.T will inaugurate their new office in the presence of their family members.

Up until now in Shaadi-Mubarak, Preeti accepted K.T’s proposal to be his business partner. Further, Tarun and Rati bought a new car and showed Preeti that they are happily living without her.

Now as per the future twists of Shaadi Mubaarak, Preeti and K.T will inaugurate their new office and will coincidentally suggest the same name ‘Shaadi Mubarak’ for their new company.

Elsewhere, everyone will be surprised to see K.T and Preeti’s chemistry, while K.T’s mother will not be happy about Preeti being K.T’s business partner according to the gossip news of Shaadi Mubark serial.

Let’s see what happens next in the future story of Shaadi Mubaark serial.

© Copyright serialsindia.com, 2018, 2019, 2020. All Rights Reserved. Unauthorized use and/or duplication of this material without written permission from serialsindia.com is strictly prohibited.
Cached Saved on: Monday 6th of February 2023 04:47:45 AM