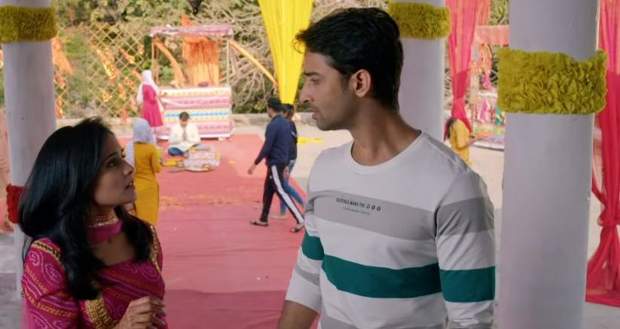 The Yeh Rishtey Hai Pyaar Ke 23 Jan episode begins with the Maheshwari family leaving for the temple.  Mishti is reminded of the time when Abir proposed her in Maa Ambe temple.

On the other side, Abir is praying to Ambe Maa for his love, Mishti to come back in his life. Mishti reaches there.

Abir leaves after seeing the Maheshwari family there. Just when Maheshwaris are leaving, Mrs. Parekh( Ketki's ex-mother-in-law) reaches there.

She confronts them for choosing Mishti as Nishant's partner, as her relationship has been broken two times before. While she is defaming Mishti, she asks is there anyone who will choose Mishti as her partner.

Just then, Abir comes there and defends Mishti. He regrets leaving Mishti after Mrs. Parekh enquires why he left her.

After Maheshwaris departs apart from Mishti and Nishant, Parul wants Abir to tell the truth to Mishti soon. Abir rushes to meet Mishti for the same.  Mishti refuses to listen and leaves.

Nishant comes over there and wants Abir to back off. Abir wants to tell him the truth.

In the meanwhile, at the Maheshwari house, Kuhu asks Mishti about her Mauli. Just then, Nishant comes over there with Mauli in his hand.

Nishant wants to talk to Mishti in private. On the other hand, Kunal is tensed regarding Abir not telling Mishti the truth.

© Copyright serialsindia.com, 2018, 2019, 2020. All Rights Reserved. Unauthorized use and/or duplication of this material without written permission from serialsindia.com is strictly prohibited.
Cached Saved on: Saturday 2nd of July 2022 02:21:57 AM