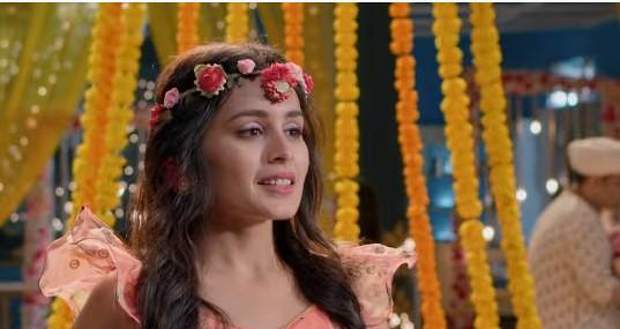 The Yeh Rishtey Hai Pyaar Ke 14 Feb episode begins with Parul requesting Nidhi to not taunt Jasmeet after reaching the Maheshwari's house. Nidhi tells Parul to not behave like Meenakshi and leaves thereafter.

Elsewhere, Mishti searches for the document that Kuhu snatched from her before in the wardrobe. Rajshri comes there and takes along Mishti with her for the Haldi.

Abir and Kunal disguised as women accompany the Rajwansh family for the Haldi function. Kunal wants to confess his love for Kuhu to prevent divorce.

Kuhu seems tensed and Parul asks her to relax. Kunal in the disguised appearance massages Kuhu's back in order to understand the reason behind her sadness.

Abir then comes there and takes Kunal with him for the Haldi ritual. Both Abir and Kunal romance later with Mishti and Kuhu respectively.

Kunal tries to mend his relation with Kuhu, just then Mishti comes there with Kuhu's document. Jasmeet bumps into Mishti and finds Kuhu's divorce papers with Mishti.

Varsha gets stunned hearing about it from Jasmeet. Kuhu slaps Mishti for ruining her life.

© Copyright serialsindia.com, 2018, 2019, 2020. All Rights Reserved. Unauthorized use and/or duplication of this material without written permission from serialsindia.com is strictly prohibited.
Cached Saved on: Wednesday 1st of February 2023 10:18:58 PM