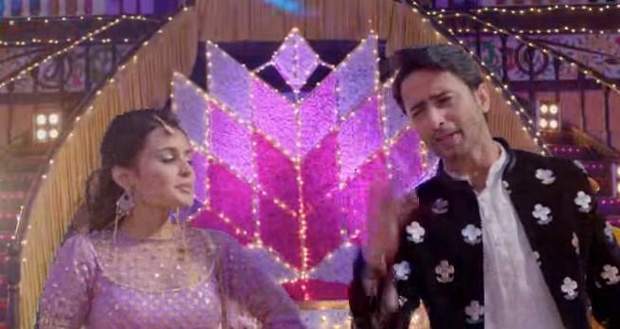 The Yeh Rishtey Hai Pyaar Ke 10 Feb episode begins with Kuhu entering with the band members inside the Rajvansh mansion. Everybody cheers up.

Kuhu then calls up some girls with their faces covered with a veil and covers Abir's eyes with a black cloth to spot Mishti among them. Abir is able to succeed in it.

Abir thereafter takes Rajshri and Vishambhar's blessings. Kuhu then reveals the theme to Maheshwaris which is a celebration after the break-up.

Rajvansh takes up the challenge and dance on the song ''Chor bazaari".  Rajshri and Vishambhar's praises Maheshwari's for their spirit.

Kunal then whispers to Kuhu that she has already lost. She gets irritated and starts her dance on "Tu cheez badhi hai mast".

Meanwhile, Shaurya asks for a drink who is disguised as the waiter. Everybody dances with Kuhu.

Later, Mishti starts her solo performance by singing "Saathiya". Abir joins her too.

Thereafter, everyone dances on "Tamma Tamma". The chandelier is going to fall down, which is noticed by Vishambhar. He shouts Mishti's name then.

Abir saves her and his hand gets hurt in the process. Kunal and Shaurya get hold of the disguised waiter. Nanu removes his fake mustache and gets surprised seeing Lakshman.

He tells everyone that Lakshman works for Meenakshi.  Kunal asks Lakshman about who sent him there.

Lakshman tells that he isn't responsible for bringing down the chandelier. Later, Rajshri takes the blame on herself for placing the candle near the rope.

Maheshwaris leave thereafter. Kuhu wants to talk with Kunal, but he goes to Abir.