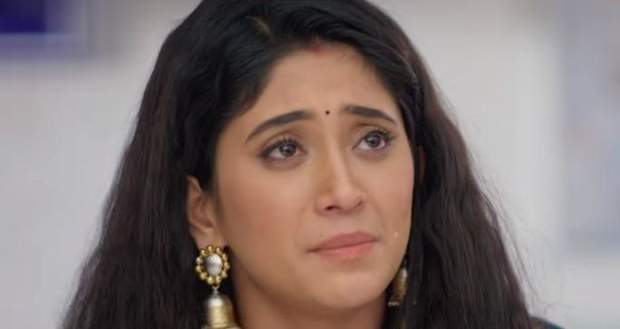 The inspector suspects of that been there at the accident site or picked by someone else. Kartik and Naira demand to talk to the truck driver again.

Elsewhere, the police visit Goenka's house for investigation of Trisha's case. Everyone gives their statements except Luv-Kush.
Kairav and Vansh ask Luv and Kush later about hiding the chip packet. Luv lies to them it being for a science project and asks them to not tell anyone about the same.

Kartik and Naira question the truck driver regarding the accident. He tells that Trisha indeed came in front of his truck.

Goenka's are concerned about Trisha's well-being. Naira and Kartik reach the home and tell everyone that Trisha was molested.

Everyone gets shocked, Naira later goes to her room with Kartik to relax.

She receives a message from the inspector with the image of a locket, that was found with Trisha. On coming outside the room, she notices Abhishek wearing the locket of the same design but a different color.

She questions Abhishek regarding his pendant and tells about the image that she received from the police. Surekha gets mad at Naira for doubting her kids.

Naira then asks for forgiveness from Abhishek, Luv, and Kush.

© Copyright serialsindia.com, 2018, 2019, 2020. All Rights Reserved. Unauthorized use and/or duplication of this material without written permission from serialsindia.com is strictly prohibited.
Cached Saved on: Sunday 5th of February 2023 03:10:04 AM