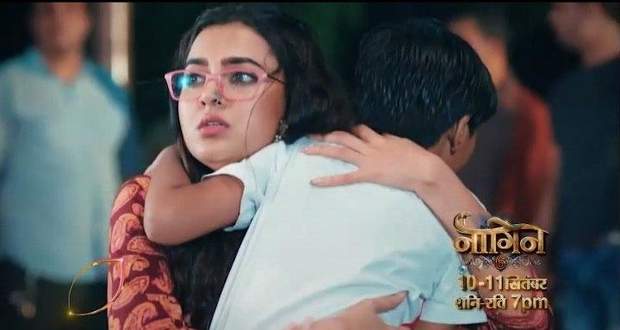 Today's Naagin 6 10th September 2022 episode starts with Pratha having a nightmare and she suddenly wakes up.

Anmol and Rishabh see Pratha and make fun of her.

Rishabh teases her and calls her cute while Pratha says she has never seen her father being so possessive.

Anmol cuts the cake and celebrates her birthday.

Later she goes to grab her phone but sees a big silver snake and screams in horror.

Pratha recognizes him as a messenger of Naga Raj and goes outside to talk to him.

Farishta tells her that Naga Raj has gone into the service of Lord Vishnu and Goddess Lakshmi leaving him behind.

Farishta also informs Pratha that since her daughter is twenty it’s time for her to be Shesh Naagin.

Pratha denies that she will never let her daughter be a Shesh Naagin.

However, Farishta says he and Raja Takshaka will coronate her daughter under Pratha’s presence.

Elsewhere, Prarthna and the Professor are celebrating her birthday at a tea stall.

They see a woman screaming for help to save her son from a snake.

Prarthna rushes to grab the child and the snake bows in front of her while the Professor gets alert and scolds Prarthna for her actions.

Meanwhile, at the Gujral house, Anmol tells Pratha she is waiting for Rudra’s call since she is expecting a marriage proposal.

Rishabh says if Rudra destroys Anmol’s dreams then he will kill him.

He also adds that Pratha is still as beautiful and hasn’t aged at all while Pratha gets anxious at this.

On the other hand, Professor and Prarthana move to Badarpur.

Later, the Professor comes along in a room and predicts that Bharat will get attacked on the 10th of September.

Following this, Prarthna and the professor are in the streets shopping when a swarm of bees attacks them.

Prarthna sees a car speeding toward her when her one touch slows down its speed and she gets astonished.

On the other side is a handsome man helping a boy from the bees.

In the future story of Naagin 6 on 10th September 2022, Pratha will have nightmares about her daughter Anmol becoming a Shesh-Nagin.

Pratha is scared for Anmol, but she does not know that Anmol is not her biological daughter.

According to the latest spoiler of Naagin, Parthna is Pratha’s actual daughter who is raised by an Asura.

Later, Prathna will save a boy on the road from a snake.

However, the poison does not harm Prathna much to everyone’s shock.

On top of that, the only difference between Pratha and Parthana’s physical structure is that Pratha wears glasses.

In the upcoming episodes, it will be interesting to see how Pratha and Prathna will react when they will come face to face with each other.

Let’s see the future episodes of Nagin to learn how Pratha will find her daughter Prarthana and what her reaction be when she will learn her daughter is the next Shesh Naagin.

To get to know more, download Naagin season 6 all episodes or watch the online full show episode of Nagin 6, go to the Voot app.