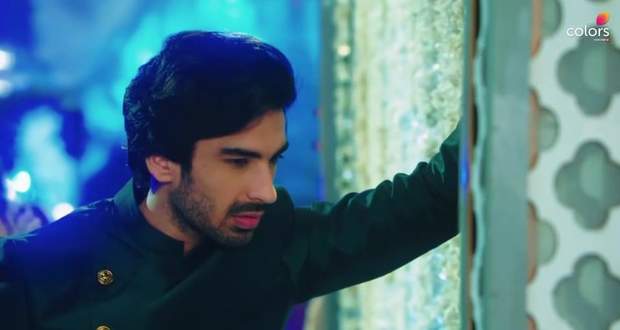 The Nagin 5 26 September episode begins with Mayuri making some plan and waiting for Bani and Veer to fight. Bani acts to be unconscious in front of Mayuri.

Jai makes a call to Bani, while Mayuri takes Veer to his room. Sunny tries to reveal Mayuri’s truth as Bani accuses him of harassing her. Mayuri covers up the situation so that Sunny doesn't reveal her plan.

Jai reaches Bani and Veer’s reception party and gets shocked to know that Veer and Bani are married. Later, Bani gets a vision of a Peacock and a snake on touching Mayuri’s hand. Meanwhile, Meera is harassed by Daksh, and Veer slaps him and asks him to apologize to Meera.

Jai comes in front of Bani and reveals that he was saved by a net on the cliff. Bani informs him about her plan, while Jai gets ready to help her.

Further, Bani gets to know that Mayuri is a Morni and they both get into a fight. Bani gets injured and Veer helps her in getting out of the fight.

They both get closer as Veer applies for the medicine to Bani’s wounds. Elsewhere, Mayuri threatens Bani that she will reveal her truth to Veer.

Later, Balwant attends his business meeting, while Bani tries to motivate Veer to attend the meeting. She serves food to everyone in the meeting and introduces herself as Balwant’s daughter-in-law.

She offers vodka to everyone and decides to get one drink for herself. Mayuri makes a plan to give Naagfani to Veer so that he would kill Bani in his dangerous avatar.

Bani spoils Balwant’s meeting by dancing weirdly, while Veer takes her to her room. Mayuri puts Naagfani on Bani’s broch so that it would hurt Veer.

Jai asks Bani to instigate Veer for a fight by using his brother’s remains. Bani goes out somewhere, while Mayuri witnesses this and informs Veer about Bani going out.

The next episode of Nagin 5 episode: Mayuri to attack Bani using an arrow.

© Copyright serialsindia.com, 2018, 2019, 2020. All Rights Reserved. Unauthorized use and/or duplication of this material without written permission from serialsindia.com is strictly prohibited.
Cached Saved on: Wednesday 1st of February 2023 08:58:57 PM