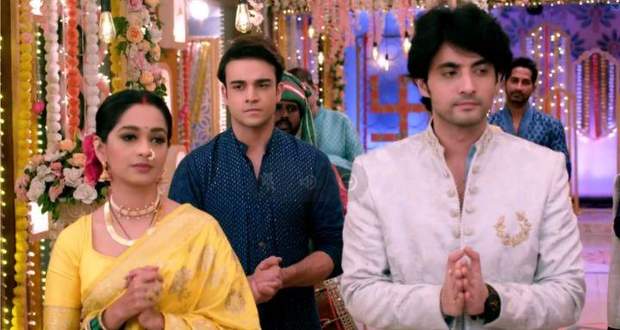 Today's Kumkum Bhagya 2nd September 2022 episode starts with the beaming lights and elation of Ganesh Chaturthi coming to an end while Prachi tries to approach Ranbir.

However, Ranbir ignores Prachi by recalling the words of Sid again and again as he sees her or Siddhartha.

Prachi feels her soul getting destroyed and asks Lord Ganesha what wrong she has ever done to anyone so that she has to bear its consequences.

Meanwhile, Vikram and Pallavi take Ranbir with them and Rhea notices it.

Ranbir asks why Vikram and Pallavi have called him to which the couple share a glance at each other.

Pallavi tells him that after the events have unfolded before them, they have decided to marry off Prachi with Siddhartha.

Ranbir gets shocked and stunned by the decision exploding in his brain.

However, Rhea and Alia get overwhelmed by the decision taken by Vikram and Pallavi.

Suddenly Prachi yells a 'NO!' who has overheard their conversation and announces that she is not going to marry anyone on someone’s demand or decision.