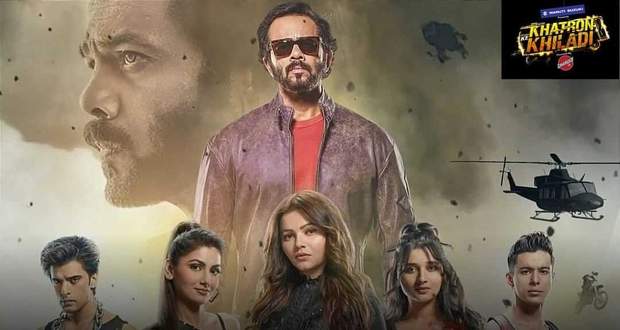 However, this week it will entertain them with the Ticket to Finale week and some precarious stunts.

In the latest promo of KKK12 (11 September 2022), Mr. Faisu is seen getting ready for the dangerous and thrilling car stunt as he attempts to be one step closer to the ticket to the finale.

All the contestants cheer for Faizu as he jumps from one car to another while all the cars are moving being tied to a safety harness.

All the contestants are willing to participate in incredibly dangerous aerial, and water stunts at getting a ticket to the finale.

The audience will get to see their favorite contestants performing a lot of arduous tasks and stunts in the twenty-first episode of Khatron Ke Khiladi 12 on (11-09-2022) at 9:30 P.M. on Colors TV.

The episode of 11 September 2022 starts with Rohit Shetty greeting the contestants and reminding them again that Rubina and Mohit are out of the race to win Ticket to Finale.

The remaining six contestants have a chance to win the future tasks now to become the first finalist.

The stunt is a partner task and both the partners will be standing on opposite platforms on a narrow bridge in midair while they will be showered with full-pressure water.

However, the bridge will get narrower with time and the pairs will have to cross it and close the valves on the opposite side stopping the water taps to complete the task.

However, Jannat is prohibited from doing stunts due to her medical issue which leads to Mohit becoming her proxy.

In the end, Kanika and Rajiv are out of the race to win the Ticket to Finale due to being last.

At the second task location, Rohit tells the contestants that from the pair, both the contestants will be in different moving trucks and transfer rings from one truck to the other.

The pair with the most rings collected will get to win the task.

However, Tushar and Faizu have more rings and win the task getting them closer to the Ticket to Finale stunt.

Meanwhile, Nishant and Jannat (Mohit as proxy) lose the task and are out of the race to win the ticket to Finale.

Rohit Shetty informs Faizu and Tushar that this task will be a mix of both aerial and dynamic tasks.

In the stunt, the contestant will have to arrive at their stunt location using a Maruti Suzuki Swift car and hook themselves to the harness.

Afterward, the contestant will have to climb the tower to the top and flare the smoke bomb attached to one of the poles.

Further, the contestant will have to jump onto a net near the edge of the tower and attach the flag to the net and flare another smoke bomb which will indicate the end of the task.

Both Tushar and Faizu give their all and complete the whole task.

However, Tushar completes the task fast and wins the task becoming the winner of the Ticket to Finale and the first Finalist of Khatron Ke Khiladi 2022 Season 12.

© Copyright serialsindia.com, 2018, 2019, 2020. All Rights Reserved. Unauthorized use and/or duplication of this material without written permission from serialsindia.com is strictly prohibited.
Cached Saved on: Saturday 28th of January 2023 11:39:35 AM