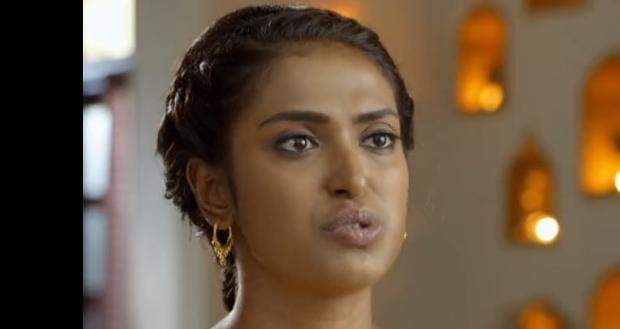 The Kartik Purnima 15 Feb episode begins with  Soni belittling Purnima after she touches her legs to clean them with her hands. She mistakes Purnima as the house servant.

Elsewhere, Shanaya has gone to Kartik’s clinic to meet him. She confesses her love to him.

Kartik gets shocked as he assumed that Shanaya loved Sumrit. Shanaya tells Kartik to accept her proposal otherwise she will tell Sumrit about the same.

Kartik gets worried, Shanaya leaves. Soni on the other side asks Bina regarding whereabouts of Shanaya.

Bina tells her that she is preparing for Miss Punjab's title now. Soni gets upset and warns Bina that she won’t accept Shanaya’s ambitious attitude after she gets married.

Bina agrees with her. While leaving Soni offers money to Purnima to buy fairness soap for herself. She further mocks at Purnima’s complexion.

Purnima while feeling hurt rides her scooty. Kartik is on the way in his car recalling the words of Shanaya.

Their vehicles collide with each other and Purnima falls down. She gets mad at Kartik and tells him that he is a big lier.

Kartik wonders about when did he lie after she leaves from there. Purnima reaches the temple and questions deity regarding the discriminations humans do on the basis of color, caste, and creed.

The written episode of Kartik Purnima upcoming update: Soni arrives at the temple where Purnima is praying.

© Copyright serialsindia.com, 2018, 2019, 2020. All Rights Reserved. Unauthorized use and/or duplication of this material without written permission from serialsindia.com is strictly prohibited.
Cached Saved on: Wednesday 1st of February 2023 09:19:23 PM