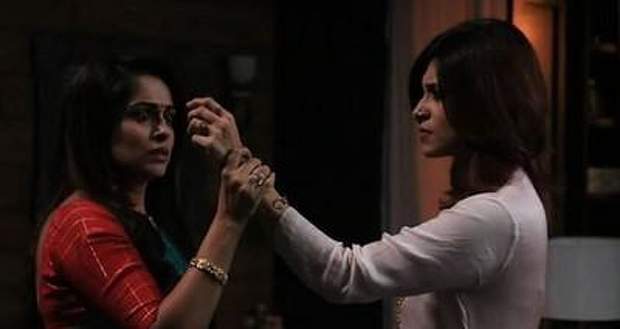 The Kahan Hum Kahan Tum 4 Feb episode begins with Rohit asking  Sonakshi about the reason for not receiving his calls. Sonakshi tells that she is not interested in talking to him.

Rohit holds Sonakshi in his arms and takes her away to the hospital. Elsewhere, while Tanya is waiting for Rohan to return back in the car, Pari comes all of a sudden.

Pari warns Tanya of taking away Rohan from her life and leaves. At the hospital, Preeti makes Rohit apologize to Sonakshi, after sensing that they are upset with each other.

Rohit apologizes to Sonakshi and further confesses his love for her to please Preeti. Nishi tries to poison Akash and Deepa's mind against Sonakshi, on the other side.

Sonakshi after returning back home finds her room lights off. While she searches for her mobile inside her wardrobe, Nishi appears in front of her.

Nishi confronts Sonakshi about the reason for her entering her room, in her absence. They both argue and Nishi pushes Sonakshi with her left-hand.

Nishi asks Sonakshi whether she feels that, she is the one who pushed Naren. Sonakshi stops Nishi and tells her she did.

Sonakshi warns Nishi by telling her that the police have the proofs against her. Nishi on noticing Veena outside tries to manipulate her by pleading in front of Sonakshi. Sonakshi tells Veena that Nishi is doing a fake act and is responsible for Naren's murder.