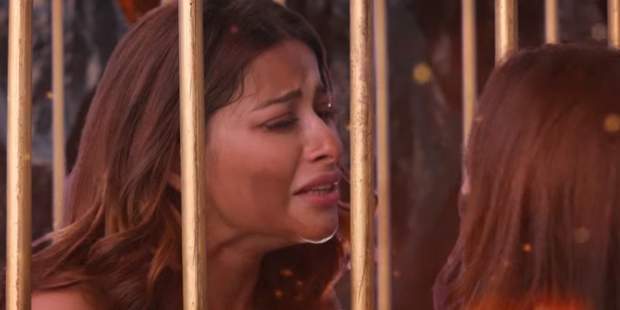 The Divya Drishti 24 Nov episode begins with Romi and Rakshit learning about a vulture roaming around Patali’s body. They get suspicious of Patali being alive and decide to visit a jungle.

At the same time, Shikhar traps Drishti in going to hell in the getup of hell guards. Pishachini creates a door in Shikhar’s room from where they enter hell.

Rakshit searches for Drishti while Shikhar gets worried to see his posters in hell. The guards announce Divya should be killed for her crimes.

Rakshit and Romi fight the vultures to get Patali’s heart. Shikhar follows Pishachini’s instructions and puts Drishti in a Mayavi Dwar. Also, Drishti gets suspicious about Shikhar knowing too much about hell.

Drishti and Divya meet in hell while Rakshit stops Pishachini and shows her the heart of Patali. At the same time, Shikhar continues to wait for Pishachini and thinks she ditched him.

Divya’s cage is put over burning oil while Drishti is put into jail. Later, Shikhar takes the getup of Jallaad to save himself from Kaal Devta.

Drishti uses her powers to escape jail and help save Divya. Rakshit also arrives in hell and asks Kaal Devta to spare Divya and Drishti as Patali is still alive.

Divya and Drishti return home along with Rakshit and Shikhar. Drishti explains Shikhar’s actions and everybody praises him for using the brain at the right time.

The written episode of Divya Drishti upcoming update: Prisoner number 401 gets shocked to learn that his birthday and Shikhar’s birthday coincide.

© Copyright serialsindia.com, 2018, 2019, 2020. All Rights Reserved. Unauthorized use and/or duplication of this material without written permission from serialsindia.com is strictly prohibited.
Cached Saved on: Saturday 2nd of July 2022 02:49:47 PM