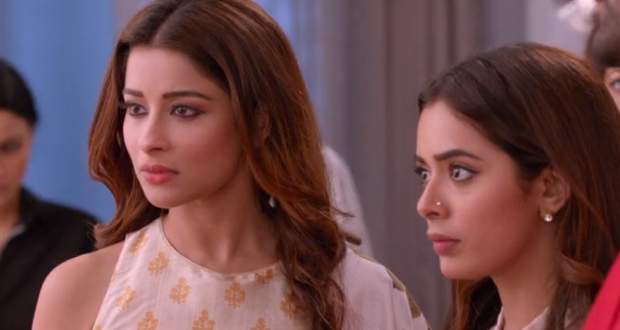 The Divya Drishti 16 Nov episode begins with Shergills pampering Pishachini so that she agrees to help them in saving Divya. Pishachini denies while Mahima and others leave.

Divya is worried about the court verdict and shares her feelings with Shikhar. At night, Divya and Drishti execute their plan and return in a drunken state.

They do this to distract Pishachini and start playing Antakshri with her. Meanwhile, Rakshit helps Shikhar in entering Devdi to get Patali’s body.

He uses his flexibility to cross to laser beams to reach Patali’s body. Later, Shergills fail to stall time and Rakshit starts dancing with Pishachini to distract her.

Kaal Devta declares he will give the verdict against Divya if the body is found with Shergills. Later, Divya finds some liquid and drinks it accidentally.

She looks exactly like Drishti and the Shergills decide to use the liquid for their plan. They decide to hide Patali’s body under the tree by changing it into Simmi.

Also, Shikhar meets Pishachini and reveals she instructed him to steal Patali’s body. Shikhar tries to tell Pishachini something but is interrupted by Romi.

The Shergills again distract Pishachini to hide Patali’s body but fails. Later, Pishachini returns with the doctor and Shergills turn Patali into Drishti and hide her in the tub.