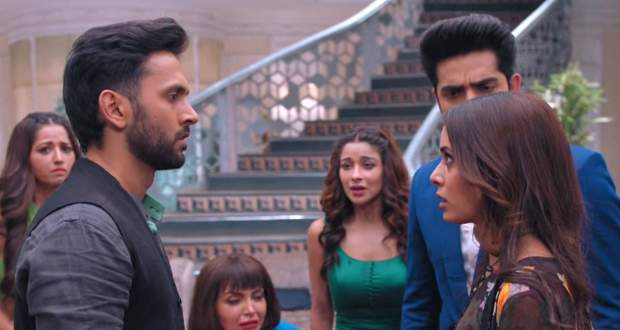 The Divya Drishti 15 Dec episode begins with Shikhar doing the scan for opening the locker. The scan completes and Shikhar is able to open the locker. Pishachini and Drishti both get shocked.

Pishachini makes Shikhar fall on the ground and shows he was wearing lenses. Drishti shows the lenses to everyone and says he is a fake Shikhar.

She further reveals the truth of him being prisoner number 401 and Shikhar accepts he was in hell. He continues to repeat that he is real Shikhar but nobody believes him.

Further, Mahima sees the poster of prisoner number 401 and they all tie him to a chair in a room. They use garlic cloves to stop him from escaping.

Meanwhile, Kaal Devta confronts Pishachini and learns that Shikhar is prisoner number 401. Pishachini wonders who sent him to hell.

Divya and Shikhar confess their feelings for each other. Divya leaves stating that she will marry Vicky. Shikhar asks Drishti to test Vicky while later she gives him the pendant.

Vicky hides his pain after holding it and later throws it away. Drishti sees in her vision that Shikhar is following Divya and again misunderstands him.

Vicky wears a fake Taweez while later Drishti finds the silver Taweez near the stairs.

The written episode of Divya Drishti upcoming update: Drishti makes a plan to reveal the true face of Vicky.