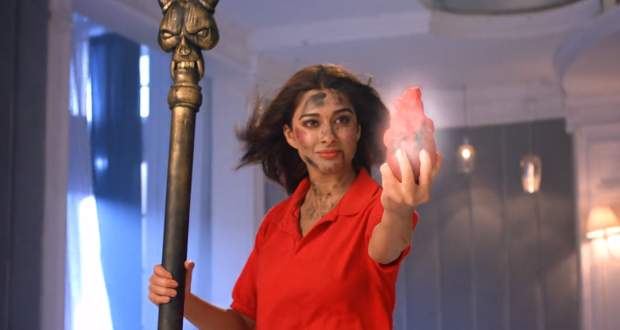 The Divya Drishti 13 Oct episode begins with Rakshit coming out of the room while Drishti getting stuck inside. He saves Drishti from Pishachini but later finds Ojaswani Chachi in danger.

Drishti saves Chachi and later stalls Patali so that Divya can search for her heart. Divya is attacked by many guards in the hell.

Divya and Drishti both try to destroy her heart but the building starts shaking and everything becomes dark.

The heart disappears along with Patali and Pishachini. Patali is dying and Kaal Devta says that Pishachini has to kill Divya and Drishti before the night ends.

Drishti gets a vision of her killing Rakshit and gets upset. Further, Divya and Drishti learn that someone in the house is having Patali’s heart inside their body.

Later, Drishti learns that Rakshit is having Patali’s heart when he successfully cures Romi. Rakshit asks Drishti to kill him while she denies it.

Pishachini also learns that Rakshit is having the heart. Drishti makes a deal with Pishachini and asks to spare Rakshit’s life in exchange for her own life.

Pishachini takes Rakshit in the dungeon to remove the heart.

The written episode of Divya Drishti upcoming update: Patali gets her heart back while later Divya and Drishti perform a dance.

© Copyright serialsindia.com, 2018, 2019, 2020. All Rights Reserved. Unauthorized use and/or duplication of this material without written permission from serialsindia.com is strictly prohibited.
Cached Saved on: Wednesday 1st of February 2023 09:20:00 PM