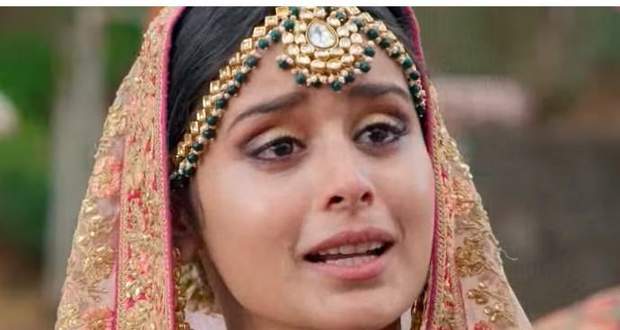 The Yeh Rishtey Hai Pyaar Ke 3 Feb episode begins with Meenakshi asking the inspector to let her go as she needs to find Abir, the inspector tells her to wait till the ambulance from the opposite side of the road leaves. Abir leaves from there driving that ambulance, unnoticed by Meenakshi and Kunal.

Mishit calls up Kunal, to inform him about Abir having left lakeside in an ambulance and asks him to confirm whether he has reached home. Elsewhere, Abir reaches the Ambe Maa temple, where he and Mishti promised to be through thick and thin.

Meenakshi is praying for Abir. Mishti finds the ambulance outside the temple and searches for Abir.

She hears the ringing of the temple bells continuously and could sense been attracted to it. Thereafter, she stands on the roof of the ambulance and shouts for Abir.

Abir appears in front of her after hearing her shout. They both share a hug.

Abir becomes emotional seeing Mishti there. He asks about the reason for leaving her wedding. Mishti confesses that she wants to get married to him.

Just then, the Maheshwari and Rajwansh family reaches there. Nishant asks Mishti to come down and to talk with him.

Nishant grabs her hand and pulls her away, Abir, on the other hand, stops Nishant to do so. Both Nishant and Abir shout at each other.

Rajshri declares that Mishti will marry Abir only. Vishambhar and Rajshri argue with each other.

Mishti takes the blame upon herself and apologizes to everyone. Nishant asks Mishti the real reason for eloping from the house. She tells because she loves Abir.