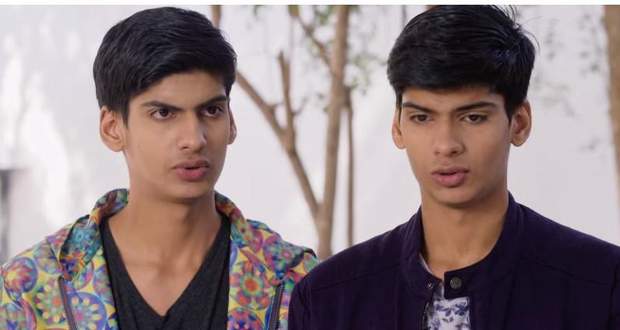 Today's Yeh Rishta Kya Kehlata Hai 4 Feb episode starts with Naira apologizing to Trisha for her critical condition and promises to find about her culprit.

Elsewhere, Abhishek blackmails Luv and Kush. He asks for Trisha's video from them so that he can earn money or give 10 lakhs amount in return to him.

Naira notices Kairav and Vansh hiding their toys beneath the ground. She asks them the reason for that.

Kairav replies that Luv told him that his wishes would come true while doing so like Luv hid his chip packet beneath the ground. Kaira leaves thereafter.

Luv manipulates Kairav to bring Gayu's jewelry for him. Kairav does the same. On the other side, Naira gets mad at the inspector for not getting any strong evidence until now.

Gayu searches for her jewelry. Naira while arranging Kairav's stuff finds the fake signature of Kartik in his diary.

Kartik and Naira confront Kairav for the same. They ask Kairav to tell them the truth else they will call the police.

Kairav becomes fearful and tells that Luv did the same and he had asked to bring a jewelry box from Gayu in return for the same.

Kartik and Naira confront Luv and Kush in front of the family. Surekha asks Luv-Kush to apologize to Kartik for doing his fake signature.

She later scolds Luv for stealing Gayu's jewelry, inside her room.