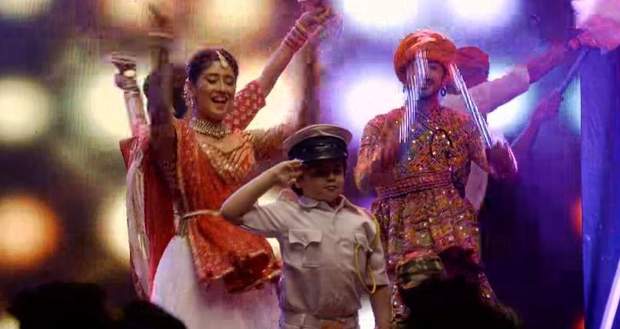 The cameraman comes to take Naira's pictures. She poses for the same.

Later, Trisha asks Luv-Kush to remove their bikes from outside otherwise they will get towed. Abhishek(Luv-Kush's friend) speaks against her to Luv.

While Trisha is preparing a script for Kairav and Vansh's speech, Luv thinks to teach her a lesson by changing the script.

Kartik compliments his family members wearing attires of different cultures. Naira praises Trisha and tells him that he would love her dance.

Elsewhere, the minister arrives and is welcomed by Manish. Kairav and Vansh give their welcome speech for the minister that is full of blunders.

Luv and Kush laugh hearing the same. Later, Trisha realizes that Luv and Kush have changed their script.

She records their voice while they are talking to Abhishek and warns them of informing Naira about it. Luv drops her mobile.

Trisha slaps him and leaves. Luv gets mad at her.

While Naira is going to perform, she searches for Trisha. Kartik assures her of finding Trisha and asks her to go and perform.

Trisha reaches the stage later. Everyone applauds their performance. Abhishek is seeing whispering to Luv.

© Copyright serialsindia.com, 2018, 2019, 2020. All Rights Reserved. Unauthorized use and/or duplication of this material without written permission from serialsindia.com is strictly prohibited.
Cached Saved on: Saturday 2nd of July 2022 02:23:52 AM