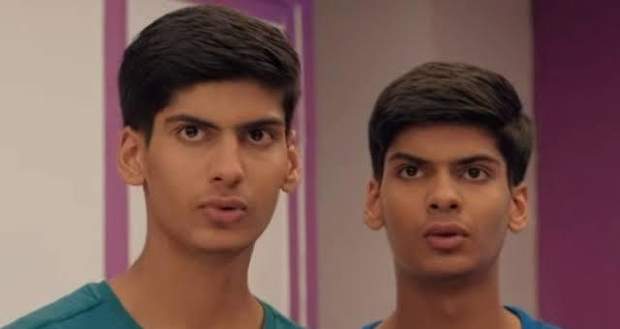 Today's Yeh Rishta Kya Kehlata Hai 28 Jan episode starts with the friends of Luv-Kush leaving for their homes. Everyone wonders about them leaving so early.

Kartik and Naira then come there along with Luv and Kush. Kartik tells about what happened to everyone.

Akhilesh in anger questions Luv and Kush for their irresponsible act. Kaira is grateful that Trisha told them about Kairav and Vansh taking beer bottles in their bag before.

Luv stares at Trisha with revengeful eyes. Luv tries to prove his innocence by telling that his friend Abhishek got the beers. He tells him that the brothers have given Kairav and Vansh fruit juices to drink instead of beer in their cans.

Nevertheless, Akhilesh punishes them to not move out of the house for 15 days and that their gifts will be canceled now.  Later, Luv shares with Kush that he won't spare Trisha.

On the other side, Kartik and Naira are upset with their negligence. Luv and Kush come to talk to Kartik when Naira isn't in the room.

They apologize to Kartik and promise him to not repeat their mistake again. Kartik, in turn, promises them that he will convince Akhilesh in their favor.

The next day, Naira and Trisha ask to leave for their dance academy on the occasion of Republic day celebrations. Luv and Kush also join them along with Kartik.

While Luv is sharing with Kush that Trisha thinks herself too smart, Naira arrives there.

© Copyright serialsindia.com, 2018, 2019, 2020. All Rights Reserved. Unauthorized use and/or duplication of this material without written permission from serialsindia.com is strictly prohibited.
Cached Saved on: Monday 6th of February 2023 05:19:06 AM