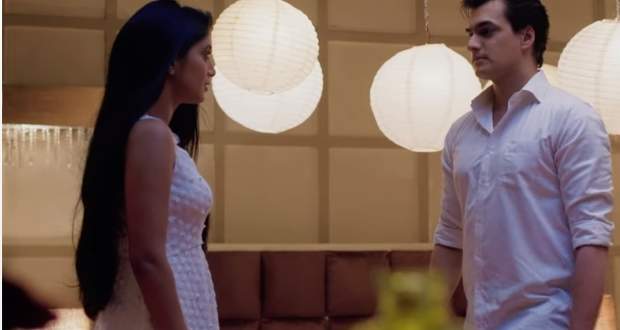 Naira calls up Suwarna to know about Kairav's well being. Suwarna assures her about Kairav being happy.

In the meanwhile, the Goenka family is having fun by playing passing the parcel game. While playing, Kush tries to pass the parcel, yet Trisha stops him after noticing him doing so.

Kaira tries to get intimate with Naira while Naira receives a call from Kairav. Hearing him sob, they both decide to return back.

Naira enquires both about their presence in Trisha's room.  Trisha narrates to Naira about the morning incident when Luv pulled away her dupatta.

Kartik on overhearing that scolds the twin brothers. Luv and Kush narrate a false story and get saved from Kartik and Naira.

The next day Kairav doesn't want to go to school as he wants to play with Luv and Kush. He tries to wake up both along with Vansh, yet leaves after brothers don't wake up.

On the other side, Trisha is doing dance practice in her room that makes Luv get up. He scolds Trisha for the same. Naira and Kairav shares a romantic moment.

© Copyright serialsindia.com, 2018, 2019, 2020. All Rights Reserved. Unauthorized use and/or duplication of this material without written permission from serialsindia.com is strictly prohibited.
Cached Saved on: Sunday 4th of December 2022 07:48:10 AM