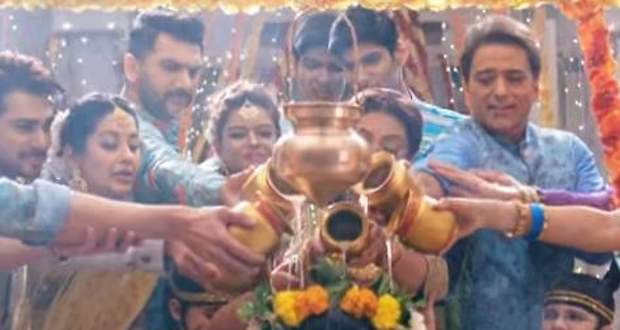 Today's Yeh Rishta Kya Kehlata Hai 18 Feb episode starts with Luv and Kush talking about going out for a movie and Naira overhearing them.

Suhasini at the same time discusses with the family members that she will ask Trisha to forgive Luv and Kush and that she will bear the expenses of Trisha in return.

Trisha on the other side decides to talk to Naira. While she tries to step outside to meet Naira, Luv and Kush take her inside the storeroom unbeknownst to others.

Trisha questions Luv and Kush of not been arrested still. Luv tells her that Naira hasn't informed the police and neither she will.

He warns her that he will do the suicide attempt drama to not get caught. Naira finds Trisha scared inside the storeroom.

She rushes to stop Trisha from going away from her house. Trisha cries and tells Naira about what Luv and Kush told her.

She further tells Naira that she didn't expect that Naira won't support the truth. Naira takes Trisha back along with her.

Naira performs tandav dance and the Goenkas gather there. The police come there to arrest Luv and Kush.

Upcoming written Yeh Rishta Kya Kehlata Hai episode update: Luv and Kush are been taken away by the inspector. Naira asks the inspector to stop.

© Copyright serialsindia.com, 2018, 2019, 2020. All Rights Reserved. Unauthorized use and/or duplication of this material without written permission from serialsindia.com is strictly prohibited.
Cached Saved on: Wednesday 1st of February 2023 05:06:39 PM