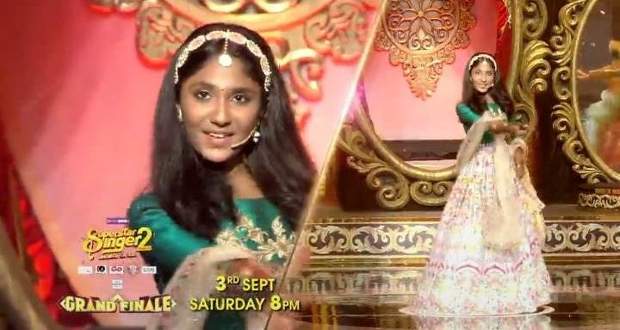 Superstar Singer 2 will have its grand finale this weekend and the six finalists of this amazing show are Mohammad Faiz, Pranjal, Rituraj, Sayisha, Mani, and Aryananda.

When asked what he would do if he wins the show, Pranjal shares he wishes to spread folk music as a musical genre to the whole world.

Pranjal talks about his wish to spread folk music to the general public as a musical genre.

Another promo of Superstar Singer 2 for this weekend (03-09-2022) shows the relay of performances by Sayisha who is a wonderful singer and artist.

To get to know more, download Superstar Singer 2 all episodes, or to watch SSS Season 2022 full latest episode online, go to the SonyLiv app or sonyliv.com

Today’s Superstar Singer 2 starts with the grand entry of the 6 finalists with a Ganpati idol behind them.

All six finalists offer a tribute to the Ganpati idol on the occasion of Ganesh Chaturthi by singing songs for Bappa and ending it with the magnetic song “Deva Shri Ganesha”.

Bharti and Harsh announce the night’s first award which is named “Best Guru Sishya”. Pawandeep and Pranjal win this award

Bharti, Harsh, Pawandeep, and Pranjal then play an exciting game by hopping around with their legs wrapped inside a sack.

Sayisha performs hit songs like “Jhalak Dikh La Ja” and claims to win the trophy for her glamour and grace.

The next award of the night gets awarded to Himesh and Rituraj for the title “Raab Ne Bana Di Jodi”.

Pranjal starts off his performance with some Bengali folk songs like “Akla Cholo Re” and continues to merge them with Hindi songs like “O Maajhi Re”, “Ura Chala Ja Re”, and “Tuta Tuta Ek Parinda”.

Aditya gets the award for the title of “Mr. Perfectionist”, receiving it from Bharti and Bhumi.

For the next performance, Mani starts his emotional vocals by singing “Mai Teri Chunariya” and subtly shifts to a light hearted, entertaining tone with the songs “Tere Bina Nahi Jina” and “Jhoom Barabar”.

Anandji bags the next award titled “Best Bachha Ever” and Pranjal wins the award for “Twist Kamariya”.

As per his fans’ request, Faiz sings the song “Khamoshiyaan” and mesmerizes everyone with his soothing vocals.

Aditya and Alkaji together do a special performance by singing some of the superhit songs of the 90s like “Aye Mere Humsafar”, “Chand Chupa Badal Mein”, “Kuch Kuch Hota Hain”, etc.

A minor disturbance happens during his performance which infuriates Himesh and it is done so by Rituraj as a prank by switching off Himesh’s mic connection.

Himesh and Rituraj pair up to perform “Teri Meri Prem Kahani” together.

For the final results, Faiz wins Superstar Singer 2 and gets to raise the winners’ trophy along with a hefty, well-deserved amount of 15 lacs.

© Copyright serialsindia.com, 2018, 2019, 2020. All Rights Reserved. Unauthorized use and/or duplication of this material without written permission from serialsindia.com is strictly prohibited.
Cached Saved on: Saturday 28th of January 2023 12:19:19 PM