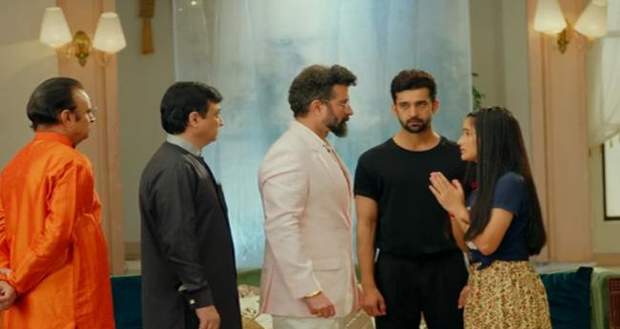 Meanwhile, Manorama and Rajjo finally met each other after the separation due to the floods.

While hugging her mother, Manorama, Rajjo is overjoyed.

Talking to Manorama, Rajjo tells her that if Arjun was not there to help her, she would not have found Manorama.

Rajjo praises and thanks Arjun for all the help he has provided.

Later that day, Rajjo goes to see Pushkar in the Thakur house.

She requests Pushkar to give her and Manorama a job in Lucknow itself.

Hearing Rajjo's request, Madhumalti is enraged, as she does not want Rajjo or her mother, Manorama, anywhere near the Thakur house.

After talking to Pushkar, Manorama drops a bombshell on Rajjo and Arjun.

Manorama commands Rajjo that she has to return home to Uttarakhand as she is promised in marriage to Vicky.

© Copyright serialsindia.com, 2018, 2019, 2020. All Rights Reserved. Unauthorized use and/or duplication of this material without written permission from serialsindia.com is strictly prohibited.
Cached Saved on: Saturday 28th of January 2023 12:06:19 PM