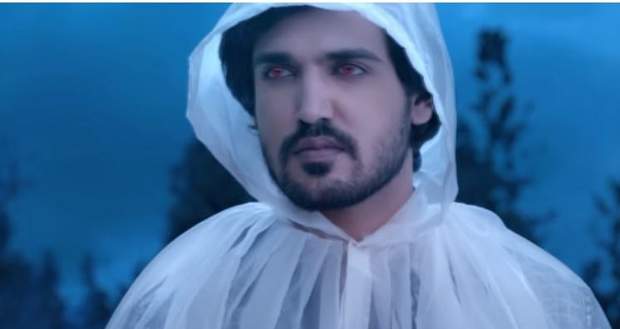 The Nazar 28 Jan episode begins with Nishant being worried about Rathods. He thinks of the solutions to save them.

Elsewhere, Mohona is taking the Rathods to a ship with her ponytail. She tells them she is sending them to the moon so that they never return back.

Ayush using the powers from the moon makes the family float over the fire. He wants to send their souls straight off to the moon.

On the other side, Mohona jumps off from the ship and mocks at Rathods for their helplessness. Ansh tries to remember what happened before. He opens the glass, previously given by Nishant to him.

In Ayush's absence, Nishant sees the glass glowing and opens it. While he is trying to explain the family members about them being in swapnalok,  Ayush takes away the bottle from him and breaks it.

The Rathods get shocked by realizing Ayush been behind their misery. Piya blames herself for Ayush's condition.

Elsewhere, Saanvi asks Naman to eat something. She receives a call from Nishant. Nishant asks her to bring a potion immediately at Rathods home.

Ansh taunts Mohona for provoking Ayush to become Kaali Raja. Ayush asks Ansh and Piya to come along to the moon, as he wishes them all to leave from his life.

© Copyright serialsindia.com, 2018, 2019, 2020. All Rights Reserved. Unauthorized use and/or duplication of this material without written permission from serialsindia.com is strictly prohibited.
Cached Saved on: Tuesday 18th of January 2022 12:12:48 AM