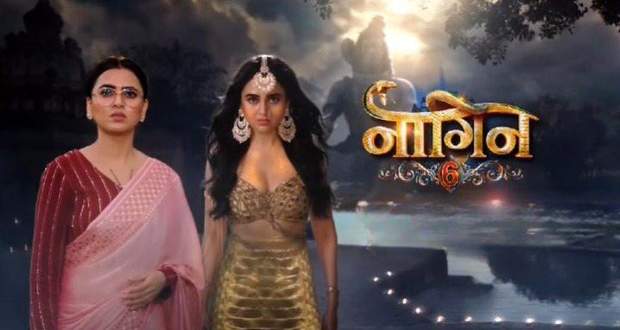 Today's Naagin 6 3rd September 2022 episode starts with Pratha feeling confused about why Rishabh is acting so weird and strange.

Soon enough, she decides to follow Rishabh late at night into the storeroom.

Pratha stands behind and watches Rishabh's every action and discovers that two Rishabh are standing in front of each other.

Pratha's heart thuds faster as she realizes the person she thought Rishabh was not Rishabh.

Changing her form into Shesh Naagin, Pratha beats Shakti with her tail and forces him to speak out the truth.

Shakti reveals he is Rishabh's twin brother and has been wanting Pratha all to himself.

However, Pratha calls Inspector Vijay and puts Shakti behind bars.

Rishabh and Pratha come close again and spend unique moments with each other where Pratha reveals that she has found their daughter's location.

Both Rishabh and Pratha go to the address shared by RPS' mother and Pratha realizes it is Professor's address.

Pratha squeals with happiness when she sees a little girl happily playing in Professor's arms.

Professor addresses Pratha as Shesh Naagin while Rishabh gets confused.

Before proceeding forward, Pratha shares her secret of being a Sarvasrestha Naagin and expects Rishabh to reject her.

However, Rishabh does the exact opposite and hugs Pratha.

The Professor then reveals how he found this baby girl in an orphanage called 'Innocent Hearts'.

Pratha meets her baby girl and asks the Professor what name he has given to her.

The professor says he has named her Anmol and both Rishabh and Pratha get emotional, holding their baby for the first time together.