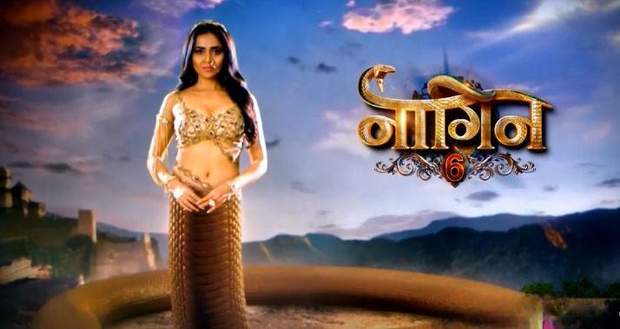 The Naagin 6 28th August 2022 episode begins with Pratha requesting Mehek to tell her where Pratha’s baby girl is.

Being a bad character, Mehek does not listen to her in jealousy and they have a big fight with Mehek saying Pratha has snatched all her aspirations and dreams.

Mehek knows she can not win against Pratha so she decides to kill herself by falling off the cliff while Pratha laments since the secret of her baby also goes with Mehek’s death.

Suddenly Rishabh comes from behind and hugs her.

Together, they get home and the Gujral family rejoices by seeing Rishabh.

In Pratha’s room, Rishabh comforts her and tells her that Lord Shiva will tell them a way to reach their baby.

It is almost midnight when Rishabh goes to get water and gets hit on the back with a rod by Shakti who locks him in a store room.

Shakti pretends to be Rishabh in front of Pratha when she comes down and asks what he is doing here. He tells her he heard a noise down so Pratha brushes it off by saying that it must be wind.

In the night while Pratha and Shakti (disguised as Rishabh) sleep, Pratha gets into a nightmare seeing Mehek barging into their room and carrying Pratha's baby.

Abruptly Mehek wakes up and tells Shakti the secret that she is a Shesh Naagin.

Shakti gets shocked but says that he loves her so he will accept her in every form.

Shakti thinks to himself that he also has a secret but he won’t tell and smirks evil.

In the morning, Shakti goes to the store room and wakes Rishabh up. He tells Rishabh his motive to get intimate with Pratha and with evilness says that if Pratha is desperate for a baby then he will give her.

This triggers Rishabh and they both have a fight, however, Shakti wins and ties Rishabh up, and goes to Pratha.

He tries to woo her by adding drugs to her juice and convincing her to get intimate but Pratha hears the cry of Reem’s baby.

She gets to know it is from an orphanage named ‘Innocent Hearts’.

She tries contacting them but gets no information about her child.

Meanwhile, Shakti feels RPS is a hurdle in his and Pratha’s relationship and thus goes to his house and burns Pratha & RPS' wedding portrait.

Divya hears him saying to himself that he is Shakti but Shakti sees her.

As she runs scared from Shakti, he grabs her and bangs her head on the wall.

Divya falls unconscious and is later found by RPS but Rajesh’s mother thinks he has hurt Divya and also killed his wife so she hands RPS to the police.

Meanwhile, Shakti smirks proudly as he gets to know about RPS and begins emotionally manipulating Pratha to get intimate with him.

As soon as Pratha gets ready she hears a call from Rajesh’s mother and promises Shakti that she’ll soon be back which leaves Shakti annoyed.

Pratha gets to know that RPS' mother used to work in Innocent Hearts and so she asks Rajesh’s mother if she recalls anything in her orphanage about the day Pratha was pregnant.

A flashback is shown where Urvashi makes Pratha’s baby drink venom but nothing happens, later Mehek gives the baby to the orphanage and the Professor who lost his wife in an accident decides to take care of his and Pratha’s baby together.

© Copyright serialsindia.com, 2018, 2019, 2020. All Rights Reserved. Unauthorized use and/or duplication of this material without written permission from serialsindia.com is strictly prohibited.
Cached Saved on: Saturday 28th of January 2023 01:14:36 PM