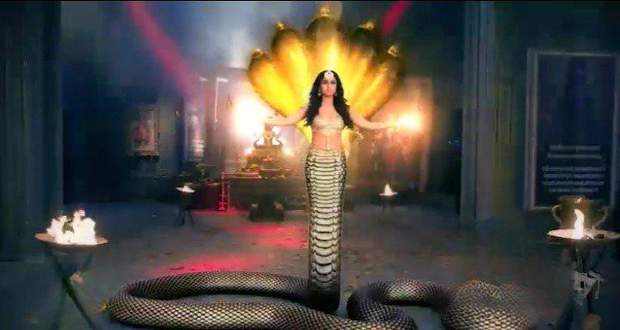 Today's Naagin 6 11th September 2022 episode starts with Prarthna sending the bees away from her touch.

She gets surprised at her power while the Professor gets anxious.

Meanwhile, Rudra remembers Prarthna and says he wants to meet her again.

In the moonlight, Rudra drives to Gujral Mansion to attend Anmol’s birthday.

Anmol gets upset when Rudra hilariously gifts her Gol Gappas.

However, he soon takes out a ring and asks her to marry him.

Anmol accepts his proposal and they both dance but it is all a part of Anmol’s imagination.

Rudra gifts her a watch and she hesitantly accepts it.

After celebrating Anmol’s birthday, Rudra tells Pratha he saw someone just like her.

Pratha laughs while Rudra says it is true. Anmol gets jealous and asks Rudra if the girl was too pretty.

On the other hand, Prarthna’s skin turns snake-like when moon rays fall on it.

She informs her father about it and he suspects her of being a Naagin.

He calls RPS’ mother and asks if she exchanged his and Pratha’s baby. She says no but the Professor does not believe her.

On the day of the full moon, Anmol dreams of herself being in Naag Mahal and surrounded by snakes.

Scared, she tells Pratha about her nightmare while Pratha tells her to focus on something else, not snakes.

Similarly, Prarthna is walking in the market and gets a headache when she hears a snake charmer playing the flute.

The snake rhythm suffocates her and she covers her ears while the snake charmer catches the snake.

Her skin stops turning golden when the snake charmer stops his flute.

A news reporter in the crowd asks the snake charmer to be a source of a story.

The reporter heard the snake charmer talk about Shesh Naagin and got interested.

He takes him to his news channel.

On the other hand, Rudra is the owner of the same channel his reporter is bringing the snake charmer to.

Pratha enters the Naag Mahal after a long wait of twenty years and says she had to come.

In the upcoming story of Naagin 6 on 11th September 2022, Prarthna, Pratha's daughter, is all set to become Shesh Naagin on the night of the red full moon.

As per the latest spoilers of Naagin 6, Prarthna will stumble into Naag Mahal, drinking the blessed milk kept in front of Lord Mahadeva that made her mother Shesh Naagin years ago.

King Takshaka, who is here to coronate Prarthna, the new Shesh Naagin, will announce a new saga beginning for all the creatures of Naga Lok.

According to the latest promo of Naagin 6, Pratha will be seeing Prarthna for the first time at Naga Mahal and realize it is her daughter.

Let us see how Pratha and Prarthna's first meeting pans out and the shock Pratha receives in the future episodes of Naagin 6.