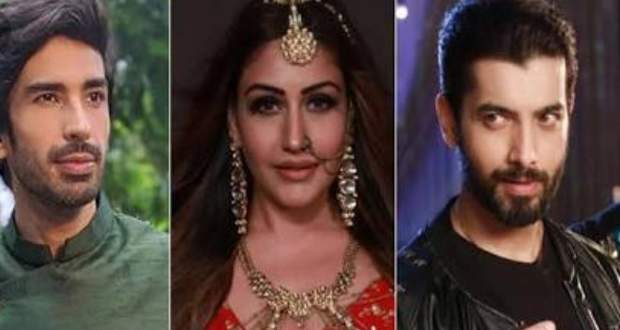 Today’s Naagin 5 3rd Oct 2020 episode starts with Sapera and Panditji’s wife finding out about Panditji's death in the temple.They find out that Jai has turned evil and has killed Panditji.

Panditji's wife decides to tell Adinaagin everything but the Sapera stops her. Meanwhile, Mayuri calls Jai up but his phone is with Bani.

Jai takes the phone from Bani and tells her that it is not an important call. He tells Bani that he is entering the house but she fears him getting exposed in front of the shape-shifting eagles.

Further, Jai disguises as Mayuri to enter the house. Bani comes downstairs while Veer looks into her eyes and they share some romantic moments.

However, Daksh senses a serpent in the house and tells Veer about the same. Bani overhears this and tries to save Jay from them.

She picks up the glass that Mayuri aka Jai had used. Further, she sends Jai before Mayuri comes down.

Veer keeps a watch on Bani as she gets the engagement started. The dance performances start while Veer and Bani also perform a couple-dance.

On the other hand, Veer starts playing Been while Bani asks him to stop. Veer suspects that she is a Naagin. She starts losing her control and Veer notices this.

Meanwhile, the Been is also making Jai turn into a serpent again, but he makes Ponky fall down. Ponky falls unconscious on the floor while Veer stops playing the Been.

Veer enters Mayuri’s room. Mayuri aka Jai now acts as if she was tired and was sleeping. As Veer leaves the room, Mayuri turns into Jai and Bani informs him that the Cheels suspect a Naag in the house.

Further, Daksh smells a serpent and is sure that Ponky’s condition is due to a Naag or Naagin. Meanwhile, Bani is regretting her act of killing an innocent person.

However, she is confused as her identity is still unexposed despite her killing an innocent soul. She realizes that she has not murdered Teer.

Jai comes to know about Bani’s confusion and makes a plan to expose her identity in front of Veer. He disguises as Mayuri and gets near Veer.

Further, Veer smells a serpent and Mayuri tells him that she is wearing Bani’s dress.