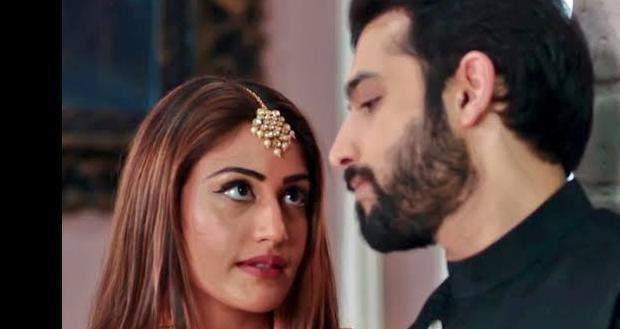 Today's Naagin 5 6 December 2020 episode starts with Bani getting a vision of Meera floating on water.

Bani gets worried while Meera tries to pacify her. Veer questions her about the reason for looking sad.

Veer takes Bani to the washroom. Bani apologises to him for saying bad about his mother.

Veer puts medicine on Bani’s wound while Jai comes there and questions her about Maarkat.

Bani tells them that Lord Shiva saved her and that she locked Maarkat in a special place.

Suddenly, Bani gets a vision of Veer drowning and her not being able to help.

Further, Bani sees water waves in her dream but gets soaked in reality which fears her and she starts crying.

Veer tries to calm her by hugging her.

Meanwhile, Singhaniyas tease Taapish for leaving his drinking habit for the sake of his fiancée.

Bani wants to go to the Naag Mandir and Veer drops her there and waits for her outside the temple.

Bani asks the wife of the priest to guide her regarding her problem. Elsewhere, Tapish behaves rudely with Meera on his family’s demand.

The ancient books at the temple get burnt while Bani finds a feather of Maarkat near the scene.

Meera hears a tap running and goes to close the tap but freezes on the spot upon reaching under the shower.

Bani does Prikrama on her knees in the temple while holding Diyaa in both hands.

Lord Shiva blesses her and shows her the vision of Maarkat’s life story to Bani.

Further, the family searches for Meera while Bani spots her standing still like a statue.

She saves Meera and tries to calm her down.

Bani tells everyone that they must leave the Singhaniya mansion right this moment and tells them to pack their bags while Veer takes her away.

Veer confronts Bani for leaving him alone outside the temple and she apologizes saying it slipped her mind.

Veer taunts her for not understanding his feelings for her.

Bani tells him that they have to get away from water bodies as far as they can.

Upcoming Naagin 5 episode update: Meera to be hypnotised by Markaat.