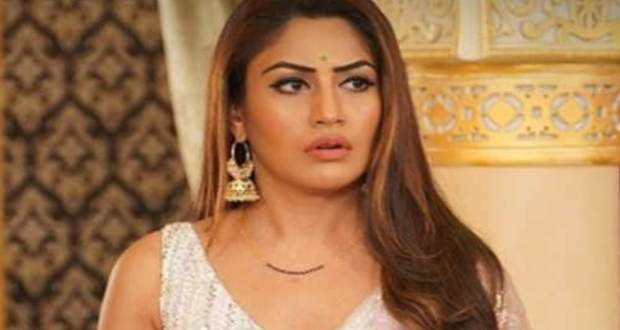 Bani comes there and tries to save her family but the car suddenly disappears.

Maarkat comes there and says that she will not let her rescue her family so easily.

Maarkat shows her a visual about Veer's family being in danger.

Maarkat warns Bani that she will kill Veer if Bani will move from her place. Further, she asks Bani to surrender her life to save both the families but she refuses.

Maarkat controls Bani and takes her to Anant Jharna while Veer feels that Bani is in danger.

She tells her to open the secret door but she refuses and takes her margin form.

Maarkat introduces her twin sister to Bani, while Veer searches for Bani.

Jail informs him that Bani has made a deal with Maarkat in order to save them.

Veer and Jai look for the Maayavi Cave but can't find it.

Bani prays to Lord Shiva for strength and almost kills both the Maarkat's.

However, she refuses thinking that she can't do it in Jai and Veer's absence.

Lord Shiva presents itself and holds Maarkat at the tip of his trident.

Jai and Veer get into an argument and fight.

Bani goes in front of the secret door of the cave and prays to Lord Shiva to give her entry.

The door opens and Lord Shiva reveals that it is Kailash.

Bani is asked to close her eyes and she has gifted a superpower to sense future danger once in her life.

Meera tells Bani that she likes Taapish and is ready to marry him. Bani gets excited and asks Meera to give a hug to her.

She gets shocked to see a vision of Meera floating on water.

Upcoming Naagin 5 episode updates: Bani to be in trouble due to her superpower

© Copyright serialsindia.com, 2018, 2019, 2020. All Rights Reserved. Unauthorized use and/or duplication of this material without written permission from serialsindia.com is strictly prohibited.
Cached Saved on: Wednesday 1st of February 2023 05:26:09 PM