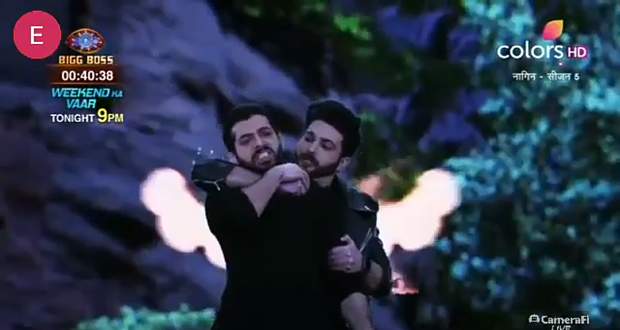 The Naagin 5 25 October episode begins with Shakura threatening to throw Bani from a height if she doesn't agree to marry him.

Shakura sends two girls to get Bani ready for the marriage but she deliberately jumps from the window.

Shukla sees the Gandhak stone and wonders if it has arrived to give the last salute to its master aka Veer before he dies.

Further, the stone frees Veer from the cage and he regains consciousness.

Bani is about to strike the ground and spots a Trishul right below her.

However, she is saved from the Trishul as her dupatta gets stuck in its pointed end leaving her hanging in the air.

Veer comes out of the cave and rescues Bani while Shakura arrives and tells Veer that she is about to marry him.

Mayuri, Jai, and Shukla reach the place and wonder how Veer is still alive while Veer pushes Shakura back from Bani.

Shakura strangles Veer from the back and throws him on the ground.

Further, he forcefully tries to marry Bani but Veer stabs him with the Trishul and he dies.

Veer teases Bani by saying that she has developed feelings for him.

Bani falls unconscious while Veer takes her home and applies ointment on her wounds.

They spend some romantic moments together and look into each other's eyes.

Later, Bani comes out from the washroom and sees Veer hiding the Gandhak stone and tells him that she knows about the stone.

Further, she tells him that she found the stone in the storeroom where she also saw a locked room.

Balwant overhears Bani and rushes to the storeroom to hide the door.

Veer goes to the storeroom to check if there is a locked door while Balwant sees Veer and stops him from finding the door.

Veer tells Balwant that he was captured in a cage and asks him the reason behind believing that Shakura is Veer.

Balwant wonders why Veer does not remember anything about his past and says to him that Shakura tried to make them believe that he is Veer.

Further, a mysterious person shouts from behind the locked door that her son has finally tried to find about her.

Jai calls Bani and yells at her for diverting herself from their main focus of killing Veer. Jai decides to use the Mayavi Ras to make Bani do whatever he wants.

The written episode of Nagin 5 episode: No precap.

© Copyright serialsindia.com, 2018, 2019, 2020. All Rights Reserved. Unauthorized use and/or duplication of this material without written permission from serialsindia.com is strictly prohibited.
Cached Saved on: Wednesday 1st of February 2023 06:06:21 PM