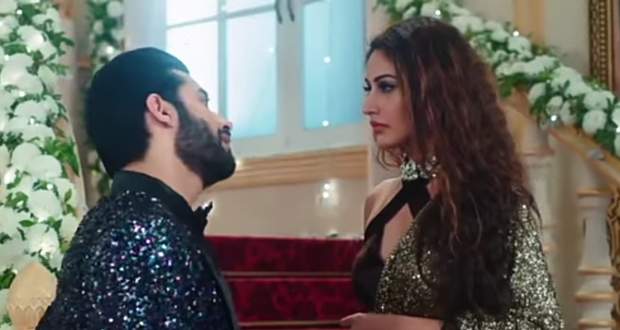 The Nagin 5 1 Nov 2020 episode begins with Veer telling Bani that she has lost her challenge as she is still inside his property.

He forcefully drags her into the house while Jai gets angry on witnessing Veer dragging Bani.

Veer corners Bani and tells her that she will fall in love with him in the next 24 hours.

Bani moves out of the room and is dragged to the side by Jai.

Bani tells Jai about Veer's challenge while Jai informs Bani about his plan to kill Veer in an explosion near a Peepal tree.

Jai talks to himself about how he has told the partial truth to Bani and also that there is a trap for her as well in the Paraag Pahadi.

Further, Jai encounters Veer who confronts him about his evil plans and warns him against harming Bani.

Veer surprises Bani by taking her to a well-decorated room and later, Bani gets scared on witnessing Veer behaving like Shakura.

On seeing Bani getting scared, Veer consoles Bani and hugs her while Bani calms down after seeing her ring on his hand.

Later, Veer shows Bani certain papers after which she gets irritated and leaves without listening to Veer.

In the morning, Jai gives special earrings to Bani through which both of them can talk to each other.

Veer enters the room and questions Bani about her earrings while Jai instructs Bani to take Veer to the forest near the hospital.

Moreover, Veer tells Bani that he has to take her to a specific place while Bani says that it is the same place where she once went with her father in her childhood.

Veer takes Bani to a different place and further, confesses his feelings for her.

He tells Bani that he wants to tell her about his real form and meanwhile, Jai is also connected with Bani via the special earrings.

Veer takes his Eagle form while both Bani and Jai are confused as to why Veer is showing his true form to Bani.

Bani does not react even after seeing Veer's eagle form and Jai instructs her to say something to Veer so that he doesn't get suspicious.

Veer tells Bani that it is the same place where he learned how to fly and at the same time, Jai asks Bani to take Veer to the Paraag Pahadi.

Both of them reach the Paraag Pahadi and Bani searches for a big tree as instructed by Jai.

Furthermore, Veer shows the Paraag Pahadi to Bani and tells her about an incident of his childhood.

He tells Bani about how he once saved a small girl and a boy from a plane crash.

On hearing this, Bani melts down in emotions as she realizes that the little girl was none other than her.

The written episode of Naagin 5 episode: No precap.

© Copyright serialsindia.com, 2018, 2019, 2020. All Rights Reserved. Unauthorized use and/or duplication of this material without written permission from serialsindia.com is strictly prohibited.
Cached Saved on: Sunday 5th of February 2023 02:43:01 AM