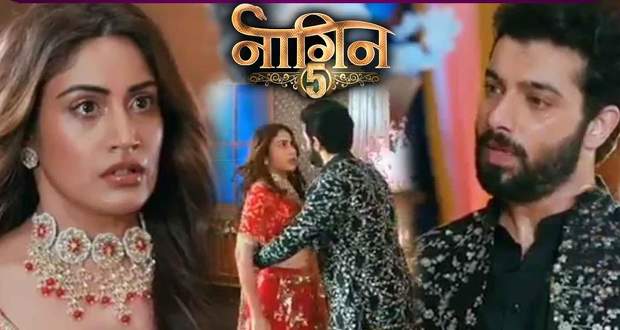 The Nagin 5 19 Sep episode begins with Veer finding out that Bani killed his brother. Bani gets shocked to see Veer alive and feels guilty for killing an innocent.

Veer asks Bani the reason for killing his brother, while Bani recalls Jai’s death and blames Veer for killing Jai. They both get into an argument and Veer wonders how Bani killed his Cheel brother.

Bani doesn’t tell Veer about her identity and acts like she doesn’t know that his family is of Cheels. Veer wishes to take revenge from Bani and ties her dupatta around their waists.

Veer threatens Bani that he will marry Meera if she doesn’t get ready for the marriage. Bani agrees to marry him and then thinks about Veer’s brother who was killed by her.

Veer puts his brother’s ashes in Bani’s Maang and puts a chain around her neck instead of a Mangalsutra. Elsewhere, Shukla reveals to Markat statue that he saw a Naagin and reveals that he was the one who killed Veer’s brother.

Bani and Veer get married and leaves for Bani’s house. Bani’s family gets shocked to see them married, while Bani’s Chachi is busy concentrating on the jewelry offered by Veer.

Further, Bani and Veer arrive at the Singhaniya mansion and Veer’s brothers plan to have a different kind of house welcome for Bani. They ask Bani to pick up the alcohol bottles on walking on one leg.

Bani manages to pick up all the bottles except the last one, while Veer comes in between and picks her up to take her to his room.