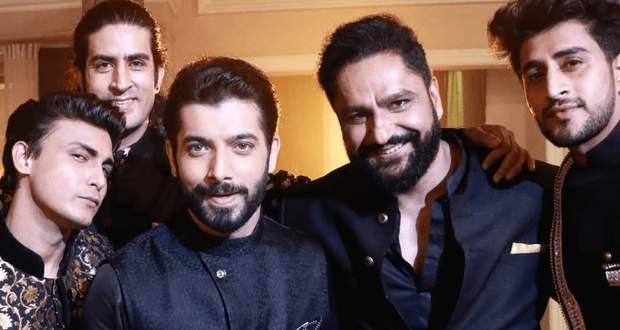 The Nagin 5 17 October 2020 episode begins with Jai thinking about Shakura changing his form into Aakesh instead of Veer. He asks Shukla about their new plan and is assured that their plan will definitely work.

Aakesh takes Bani into the sky and mutters that he will kill her without even touching, while Shukla and Jai wait to attack Bani with poisoned knives. Aakesh throws Bani from a height but then saves her.

Bani gets furious with him and they both get into an argument. Further, Jai gets into a fight with Shakura for not killing Bani.

Later, Shakura is lost in Bani’s beauty but then he gets angry without any reason. Bani takes her Naagin avatar, while Aakesh takes Jai’s name and this confuses Bani as Veer used to call Jai as Dhaba Wala.

Veer tells him that he doesn’t know about the stone, while Bani overhears their conversation.

She gets suspicious of Veer’s behaviour and then she tries to control the stone kept in the almirah. Elsewhere, Shakura informs Jai about the Gandhak Pathar, and Jai goes to the old temple to find out about the stone.

Mayuri informs Jai about Shakura romancing with Bani. The lady priest hears their conversation and learns that Jai is planning to kill Bani.

Meanwhile, the Gandhak Pathar comes out of the almirah and attacks the Cheels including Shukla. Balwant calls Veer to control the stone, while Shakura stands still with clueless expressions on his face.

© Copyright serialsindia.com, 2018, 2019, 2020. All Rights Reserved. Unauthorized use and/or duplication of this material without written permission from serialsindia.com is strictly prohibited.
Cached Saved on: Monday 6th of February 2023 05:53:11 AM