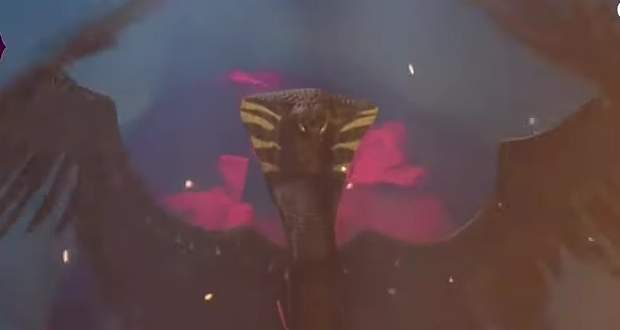 The Naagin 5 15 November 2020 episode begins with Balwant yelling at Bani for inviting her family to stay at the Singhania House.

Veer takes Bani's side and allows Bani's family to stay in his house.

Bani tells Jai that someone else is responsible for Teer and Monil's death and vows to catch the culprit.

Jai meets Maarkat and informs about Bani bringing her family to the Singhania House but Maarkat attacks him.

On the other hand, the lady priest tells the Sapera about the new enemy in Adinaagin's life.

Maarkat reveals her true form and Jai is shocked to see Maarkat's half serpent and half eagle form.

Veer goes to his mother's room and learns that she is missing.

Maarkat orders Jai to separate Veer from Bani to which Jai agrees.

Veer finds his mother and makes her eat chocolate and Bani gets emotional to witness the cute moment between Veer and his mother.

Ponky and Daksh try to sneak out late at night with Bani's sisters and Taapish catches them while doing so.

Meera asks Taapish to not let her mother know that her sisters sneaked out of the house.

The lady priest tells Sapera how Adinaagin's biggest enemy did tough penance to impress lord Shiva in Satyug and asked for the powers of both an eagle and a serpent.

The priest also tells Bani how lord Shiva punished her when she asked for his divine moon and also said that Adinaagin will be her biggest competitor.

Later, it is revealed that Jai's mother was pretending to be Maarkat to dominate the eagles.

The next morning, Bani serves tea to everyone and senses negative energy around her.

She realizes that her enemy is among the family members and rushes towards her room.

Veer sees Bani in pain due to the scars on her skin and tries to treat her wounds with a cloth.

Bani is grateful to Veer for caring for her while Veer promises to take care of her always.

Veer and Bani go to Veer's mother's room and at the same time, Meera passes by and Bani senses negative energy around her.

Veer's mother tells him and Bani that someone wants to kill her.

The written episode of Naagin 5 episode: No Precap.

© Copyright serialsindia.com, 2018, 2019, 2020. All Rights Reserved. Unauthorized use and/or duplication of this material without written permission from serialsindia.com is strictly prohibited.
Cached Saved on: Monday 6th of February 2023 05:26:28 AM