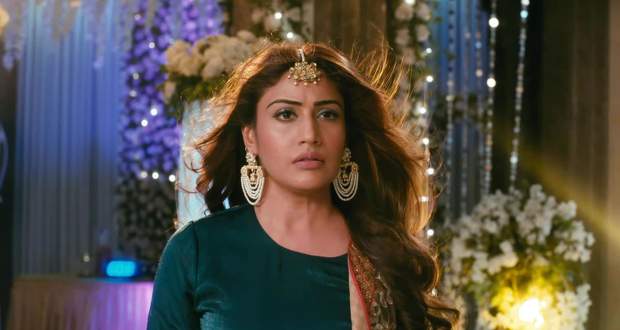 The Nagin 5 12 Sep episode begins with Jai and Bani learning about Veer’s real identity. They both decide to take their revenge by killing Veer and his Cheel family.

Bani plans to target Veer’s close ones, while Bani’s aunt asks her daughter to trap rich boys at Meera’s engagement. Bani reaches her home and is asked to help Meera in getting ready.

Bani questions Meera if she really wants to marry Veer. Bani reveals Veer’s identity to Meera and tells her that Veer is an evil Cheel. She informs Meera about her plan to kill the Cheels.

He gets to know that Veer has locked himself in the room and is trying to heal himself. Elsewhere, Bani and her family reach the function place and get surprised to see boys dancing on a song.

Bani takes her Naagin avatar and starts killing Veer’s family members. However, Bani was daydreaming and Veer brings her back to reality.

Meera gets to know that Singhaniyas are involved in the human trafficking business and she informs Bani about the same. Tapish gets suspicious of Bani’s activities and thinks that Bani is keeping an eye on Veer’s family members.

Meanwhile, a person is locked in a room at the Singhaniya’s mansion. Bani comes in the main house of the Singhaniyas while Veer follows her. He pulls Bani towards himself, while Bani intentionally gets close to him and Veer recalls his past memories.

Bani reveals that she will marry Jai the same day Veer will get married to Meera. Elsewhere, Balwant provides food to the person he is hiding in his house.

Bani and Jai make an announcement about their marriage in front of their families. Jai’s family gets surprised to hear Jai’s marriage news, while Bani’s aunt creates a scene.

The written update of the 12 September 2020 Naagin5 episode story ends.

The written episode of Nagin5 episode: Bani and Veer get into a fight.