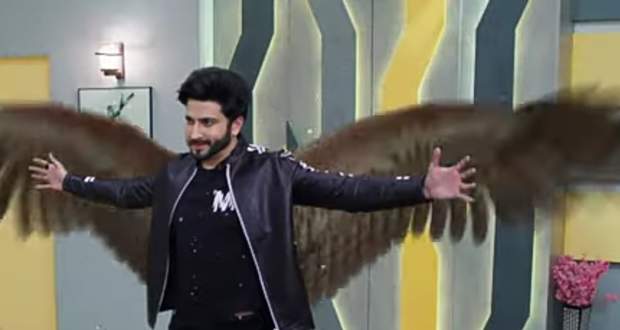 The Nagin 5 11 October episode begins with Bani recalling how Veer married her again and she moves out of the room. Balwant asks Shukla to bring the Kaal Ganak and tells him that soon Veer will recollect everything about his past life.

Bani overhears this and turns into a snake. Daksh senses a serpent and accidentally hits the hourglass.

On the other hand, Jai imitates Bani and calls for help. Veer rushes in the direction of Bani’s sound and turns into an eagle. However, Jai traps the eagle aka Veer inside a cage.

Meanwhile, Bani accidentally lands in a room in the basement. On the other hand, Jai drags the captured veer to a deserted place and hides the cage. Further, Mayuri and Shukla also arrive at the same place.

Elsewhere, Bani realizes that her powers are not working in the room. Mayuri, Jai, and Shukla reach a cave where the shape-shifting eagle Shakura is kept.

Jai asks Shakura to change his face and do as commanded in return for his freedom. Shakura agrees and takes Veer’s photograph from Jai. His face starts transforming while Bani touches a mysterious stone.

Daksh tells Balwant that the watch has started working. Shakura takes the wrong form and Jai gets shocked to see his new face. He wonders which magical power has made Shakura take a wrong form.

Bani takes the stone to Panditji's wife and learns that Panditji is dead. Sapera tells Adinaagin that the stone is a Gandak.

She asks about the use of the stone and the Sapera tells her to find it out on her own. Moreover, she puts it in the same temple and leaves.

Balwant starts panicking after knowing that Veer is not in the house. He screams at Shukla and throws a bottle at him.

At the same time, Aakesh catches the bottle and everyone is shocked to see him. He tells everyone that he is Veer and not Aakesh.

Furthermore, he announces that he remembers what his real identity is and why he has reincarnated as Veer. He also tells Balwant that he knows who Adinaagin is and Bani gets shocked to hear this.

Bani enters the living room and gets completely shocked to see Aakesh. Veer’s brothers tell her that the unknown person is Veer.

Later, Aakesh corners Bani in the room and shows his semi-eagle form. He provokes Bani to reveal her real identity and tells her that he knows that she is Adinaagin.

Moreover, he reveals that he also knows about lord Shiva’s condition for a Naagin to attack an eagle.

The written episode of Nagin5 episode: No precap