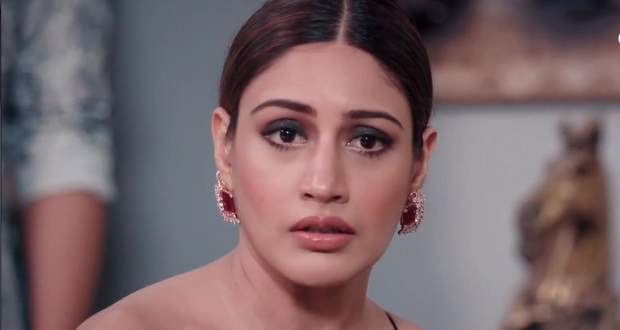 The Nagin 5 10 Oct 2020 episode begins with Veer giving Jai’s number to Mayuri. He asks her to drop a message to Jai that Bani wants to meet her at Prayaag Pahaadi.

Later, Veer goes to his room and tells Bani that Jai is not a faithful person. Bani doesn’t listen to him and says that she blindly trusts Jai.

Jai gets a message from Mayuri on behalf of Bani and gets a gut feeling that there is definitely a trap at Prayaag Pahaadi. Meanwhile, Bani acts unconsciously in front of Mayuri to fool her.

Later, Bani gets to know that all the Cheels have gone to Prayaag Pahaadi and therefore she follows everyone to that place.

Veer makes a plan with all the Cheels to trap Jai and asks all of them to hide on trees. Jai arrives there in his Naag form and gets surrounded by all the Cheels.

Elsewhere, Mayuri tries to stop Bani from reaching Prayaag Pahaadi but Bani takes her Naagin form and rushes from there to her destination.

Veer tries to throw Jai off the cliff but Bani comes there to save Jai. She justifies everything and informs everyone that Teer was killed by a Cheel.

She shows Teer’s jacket and the knife she found in the security room. Balwant gets shattered on learning about Teer’s death.

Balwant tries to kill Bani but Veer doesn’t let anyone touch her. Bani keeps on saying that Jai is a trustful person, while Veer decides to prove her wrong.

Mayuri tries to wake up Ponky but Ponky gets scared on witnessing her in front of him. Further, Veer makes himself sure that Bani will surely love him one day. He puts Sindoor and Mangalsutra to Bani, while Bani then recalls Aakesh.

Jai wants to become a follower of Maarket, while Maarket reveals that Veer will regain his memory when the sand in the hourglass will come to an end.

Meanwhile, Veer puts a curtain to divide the bed between him and Bani.

The written episode of Nagin 5 episode: Aakesh to return in Kalyug.