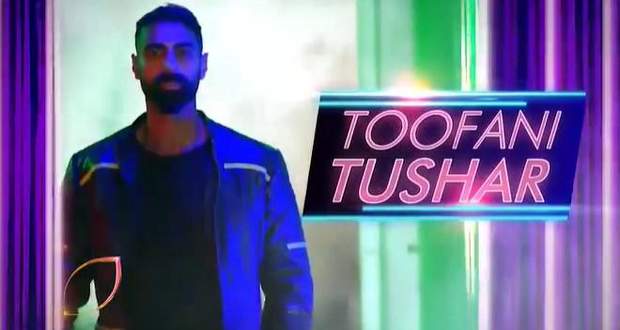 Khatron Ke Khiladi 12 of 17th September 2022 starts with Rohit Shetty greeting the contestants while reminding them that Tushar does not have to do any tasks since he has won the ticket to the finale.

Further, Rohit informs that the best performer of the stunt will go straight into the grand final while the remaining will have to wear the Fear Fanda.

Rohit informs the contestants that they will have to collect the metal strips from a platform suspended in the air from the chains while they will be electrocuted every time they touch the chain.

The contestants participating are Rubina, Kanika, and Nishant.

Nishant aborts the task while Kanika climbs the platform, but ends up aborting at the last minute.

Kanika and Nishant get to wear the Fear Fanda while Rubina gets into the finale.

At the next task location, Rohit acts sarcastically and claps for all the contestants as they are giving their best.

He informs Nishant and Kanika that they have a second chance to redeem themselves.

Rohit makes Nishant thread a needle and also applauds him as if he's done something extraordinary while Rohit makes Kanika jump from one box to another while wearing the shock belt himself.

Kanika cries and apologizes to Rohit as she tries to justify herself while Rohit says they are humiliating the show.

For the task, Rohit informs them that they have to go inside a tunnel filled with different animals and reptiles and collect many gold coins as they can in under 15 minutes.

Rohit further asks Rajiv and Jannat to keep the dignity of the show and participate in the task and not abort it.

Jannat wins the task while Rajiv has to wear the Fear Fanda.

Rohit tells the contestants that they will have to swim under a panel that will be put on fire from the top and collects the flags under that area.

If the contestants want to breathe, they will have to come back to the railings on the side as they cannot bring their heads out of the panel because it will be burning up in flames and the contestant might get injured.

Faizu wins the task and goes into the elimination while Mohit gets to wear the Fear Fanda.

Rohit then informs that Tushar, Rubina, Jannat, and Faizu have become the finalists while the remaining four will get another chance in the next episode.

Colors TV's famous stunt reality show, Khatron Ke Khiladi has reached its semi-finale after a series of dangerous and thrilling stunts and comedy.

In the latest promo of KKK12 (17 September 2022) Semi-Finale episode, the first finalist and the winner of Ticket to Finale, Tushar Kalia is seen preparing for the finale positively as he doesn't have to participate in the semi-finals.

All the contestants are seen participating in various stunts as the show has become serious now.

A compilation video of Tushar's journey showing how much determination he has given to the show to become the first finalist is also shown.

All the contestants will be partaking in incredibly dangerous aerial, dynamic, and water stunts at getting into the finale.

The audience will get to see their favorite contestants performing a lot of arduous tasks and stunts in the twenty-third episode of Khatron Ke Khiladi 12 on (17-09-2022) at 9:30 P.M. on Colors TV.

© Copyright serialsindia.com, 2018, 2019, 2020. All Rights Reserved. Unauthorized use and/or duplication of this material without written permission from serialsindia.com is strictly prohibited.
Cached Saved on: Saturday 28th of January 2023 11:46:57 AM