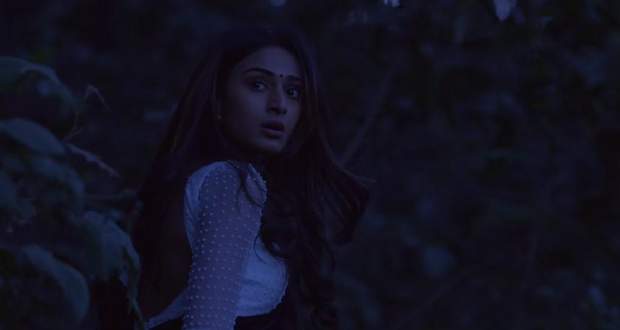 The KZK 2 23 Jan episode begins with Jagga warning Prerna to come in front of him. His brother-in-law tells him that he has picked Jagga's phone while receiving a call from the boss.

She has asked him to kill Prerna. Jagga tells goons to take his brother-in-law to the hospital.

Prerna is hiding behind the crates. He sees her while she throws something at him and runs away. The goons leave to catch her.  She runs into the jungle while the goons follow her. Anurag and Viraj also come there.

While goons find her, a snake comes in their way. Anurag and Viraj not being able to locate her return back.

Parallelly, Veena is praying for Prerna. Mohini gets irritated and asks her to stop. Moloy consoles Veena and takes Mohini away from there.

Anurag drops Viraj to his home on the way back. Viraj thinks to search for Prerna again and drive alone. Moloy is reprimanding Mohini for her behavior and blackmail her.

Komolika after reaching the godown calls out for Ronit. She on seeing the goons ask them about Prerna. Jagga tells her that they can't find Prerna in the jungle as she ran away.

In the meanwhile, Prerna knocks the doors in the village. A lady on finding her outside her house takes her inside and gives her herbal medicines. Prerna on regaining consciousness asks the lady to make a call to her husband.

© Copyright serialsindia.com, 2018, 2019, 2020. All Rights Reserved. Unauthorized use and/or duplication of this material without written permission from serialsindia.com is strictly prohibited.
Cached Saved on: Wednesday 30th of November 2022 05:41:41 AM