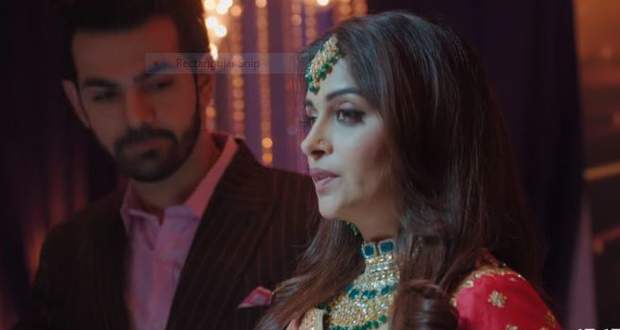 The Kahan Hum Kahan Tum 31 Jan episode begins with the inspector telling Sonakshi about her signatures been forged in the prenup papers and asks to keep an eye on the Sippy's family.

Elsewhere, Pari is out on a date with Viren. She notices Rohan and Tanya there. Pari gets mad at Viren when he questions her regarding her virginity. She leaves thereafter after feeling nausea.

Sonakshi comes on the stage. Rohit also comes there and mocks Sonakshi. He tries to convince the audience that Sonakshi is opposite to Parvati in her real life. Sonakshi saves herself by telling that Rohit was completing her dare.

Later the inspector informs Sonakshi, that someone who is left-handed in the Sippy family has forged her signature. The same person is also responsible for killing Naren.

Rohit in a drunken state wants to teach Sonakshi a lesson. Sonakshi requests Rohit to come back to his senses.

Pari, on the other side, finds out that she is pregnant. Rohit at first praises Sonakshi, then after recalling Nishi's words accuses her of the miseries.

The written episode of Kahan Hum Kahan Tum upcoming update: Sonakshi challenges Nishi of bringing her truth out in the open.