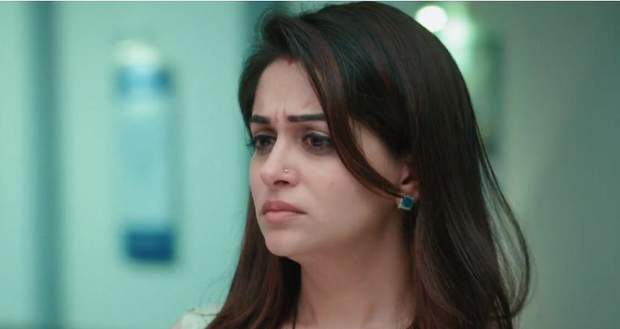 The Kahan Hum Kahan Tum 24 Jan episode begins with  Sonakshi being accused by Nishi who enquires her whether she went to Naren to demand property for Rohit.  Veena slaps Sonakshi after she refuses.

Sometime back - The Sippy family gets shocked finding Naren in a pool of blood on the floor. They take him to the hospital. Rohit coming out from OT declares that Naren is critical.

Veena asks him to save Naren while crying. Elsewhere, Pari is mad at Rohan for not picking up her call.

She and Suman reach the hospital after they get the news of Naren's attempted suicide. Tanya gets irritated seeing Pari there. Pari thus leaves from there.

Later, Nishi starts her dramatic act and cries. She wants to manipulate Sippy's. The doctor tells Rohit to call up the police to investigate this case.

Nishi becomes fearful and blames Sonakshi for Naren’s condition. She justifies that her brother would have committed suicide after been affected by someone who met him last.

Sonakshi confronts that she went last. She tries to prove herself innocent, yet get slapped by Veena.

With the arrival of police, Veena asks him to take Sonakshi for investigation. Veena faints after seeing Rohit accompanying Sonakshi.

The written episode of Kahan Hum Kahan Tum upcoming update: Sonakshi gets accused by Veena regarding a prenup deal with Naren.

© Copyright serialsindia.com, 2018, 2019, 2020. All Rights Reserved. Unauthorized use and/or duplication of this material without written permission from serialsindia.com is strictly prohibited.
Cached Saved on: Sunday 5th of February 2023 02:57:11 AM