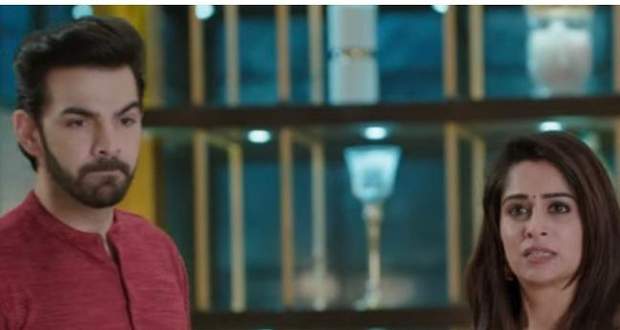 The Kahan Hum Kahan Tum 10 Feb episode begins with Sonakshi getting shocked after Rohit hands over her the divorce papers. He blames Sonakshi for her mother's act of exposing Naren's truth to Veena.

He further tells Sonakshi to sign the divorce papers and leave. Sonakshi slaps Rohit after reading it.

Rohit gets stunned and looks at Veena, feeling hurt. Sonakshi again asks him whether he considers her as characterless.

Rohit accuses Sonakshi of causing drama in his house and breaking his family relations. Sonakshi leaves after being heartbroken.

Both Rohit and Sonakshi recall their moments together, thereafter. Rohit cries and feels guilty for hurting Sonakshi.

Sonakshi gets shocked seeing Mahesh on the way. Mahesh gives her two choices, either to come with him to his house or die with his hands.

Meanwhile, Ajit informs Suman about Sonakshi being moved out of Sippy's mansion by Rohit. Mahesh pulls Sonakshi inside his car.

She later manages to run away and thereafter meets with an accident.

© Copyright serialsindia.com, 2018, 2019, 2020. All Rights Reserved. Unauthorized use and/or duplication of this material without written permission from serialsindia.com is strictly prohibited.
Cached Saved on: Saturday 28th of January 2023 01:26:23 PM