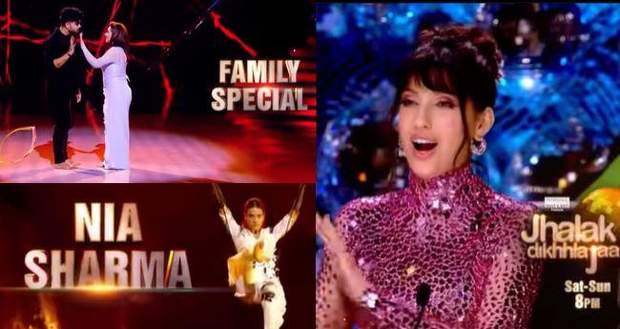 Today's Jhalak Dikhhla Jaa 18 September 2022 starts with the continuation of the Family Special theme in the Sunday episode.

Maniesh calls Amruta and Pratik onto the stage for their performance.

Amruta delivers an amazing emotional performance on the song 'Tujhme Rab Dikhta Hai', narrating her story and relationship with her mother which gets the audience connected with her as well.

Amruta receives good compliments and marks from the judges and Maneish calls Amruta's mother on the stage, who shares her love and views for her daughter.

Madhuri Dixit along with other judges and the contestants salute the mothers all over the world.

Moving further, Maneish calls the judges onto the stage to select the 'Best Judge of the Week' by giving them the task of singing a song.

While Madhuri beautifully sings an old song, Nora sensually sings the b'day song for Maneish in her sexy voice, and at last Karan along with Maneish sings the 'Meri Awaaz Hi Meri Pehchaan Hai' song with a comic touch.

The audience has fun and everyone chooses Karan as the 'Best Judge of This Week'.

Next Maneish calls Dheeraj Dhooper along with his choreographer for the performance.

Despite having a knee injury, Dheeraj dances so well describing his beautiful relationship with his lovely wife.

The judges also give good compliments to Dheeraj, however, receives a total score of 20.

Maneish calls Shilpa Shinde next onto the stage. A video clip is shown in which Shilpa is seen narrating her story, the harsh reality that comes along with families.

Shilpa narrates the same story through her performance which gets all the people overwhelmed.

Moving further to the next performance, Gunjan and Tejas dance to the 'Galti Se Mistake' song for which they receive the golden stamp on their passport.

Dutee dances to the song 'Dhakad' and receives good compliments from the judges.

Faisal dances next to the song 'First Class', dedicating the performance to his friends.

Next, Zorawar comes onto the stage, dances to the song 'Aaj Ki Party', and entertains everyone.

Moving towards the end, the first elimination of JDJ 10 comes in the name of Ali Asgar and Lipsa.

On the other hand, Nia and Tarun get the immunity in form of the golden chair.

The written update will be uploaded once the episode airs live on Colors TV or on VOOT App.

Colors TV’s famous celebrity dance show, Jalak Dikhla Jaa 10 is celebrating the relationships this week (Week 3) which make a family for one.

In the latest promo of Jhalak Dikhla Ja 10 (18 September 2022), the rebel lady of JDJ 10, Nia Sharma, is seen giving a power-packed performance on the "Mardaani Anthem" that is "Aaj Se Ab Se" depicting the power of a single woman which energized everyone on the set.

Another promo for 18th September 2022 showed Paras with his choreographer Shweta giving a heartfelt performance on the song "Kitni Baatein" which he dedicated to his late father.

The audience gets more emotional after Paras narrates his life story about his father making so many sacrifices for him.

One of the recent promos of Jhalak Dikhhla Jaa 10 (18-09-2022) shows Shilpa Shinde with her skipper Nishchal dancing beautifully to the song "Mann Bharya" from the movie "Shershah".

Shilpa Shinde shares the harsh reality of the relatives whom we count as a family can be double-faced people who side with us in good times and back bitch about us in difficult times.

© Copyright serialsindia.com, 2018, 2019, 2020. All Rights Reserved. Unauthorized use and/or duplication of this material without written permission from serialsindia.com is strictly prohibited.
Cached Saved on: Wednesday 1st of February 2023 05:15:54 PM