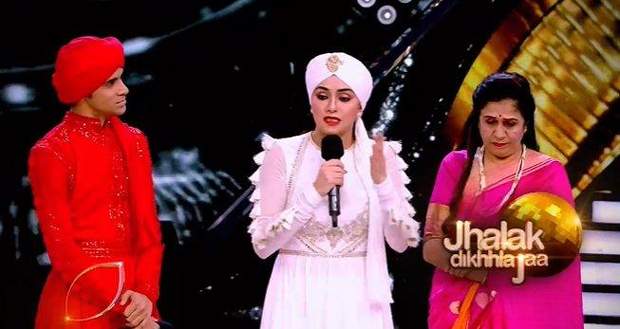 Meanwhile, Nia dedicates her dance act to her mom and brother in their struggle to support Nia’s carrier.

As soon as the dance ends, Nia’s mom and brother come to the stage to praise her for her performance.

The judges give Niya 29 marks for the amazing performance along with a golden stamp on Nia’s passport.

After that, Madhuri Dixit comes to the stage to give a speech about fatherly love.

Neeti and Akash grace the stage and give a heartwarming performance dedicating it to Karan Johar to the 'Ashiyaana Mera' song.

Seeing the performance, Karan Johar gets emotional and Manish, Madhuri, and Nora altogether give him a group hug.

Karan then tells everyone that his babies have fulfilled his life.

Once the performance ends, Neeti and Akash get 27 marks along with a stamp on their passport.

Afterward, Paras and Shewta give Paras’ father a tribute through their performance of the 'Kitni Baatein' song.

Seeing the performance, everyone including Paras’s family gets emotional.

Once the performance ends, Manish urges Paras’ family to come to the stage.

When Paras’s family arrives on the stage, Paras’ sister announces that Paras is a blessing to them.

Afterward, Paras also gets a golden stamp on his passport along with amazing compliments from the judges.

Further, Rubina and Sanam showcase Rubina and her husband’s love through their powerpack performance on 'Bekhayali' song.

After the performance ends, Rubina tells everyone how their differences become a problem in her relationship.

Hearing this, Karan Johar tells Rubina that she looks so good with Abhinav.

After that, Rubina and Sanam get 24 marks from the judges.

Meanwhile, Ali and Lipsa give a comic performance much to everyone’s amusement.

Once the performance ends, Manish shows a video in which Ali’s children tell how much Ali works hard to make everyone smile.

Hearing this, Ali gets emotional and announces how his profession has affected his children.

Afterward, Ali gets 24 points from the judges for his performance.

In the meantime, Gashmeer and Romasha surprise everyone with their powerpack dance on Sutan's song dedicated to his mom.

Jhalak Dikhla Jaa 10 has made its grand entry after 5 long years on the Colors TV channel.

In the latest promo of Jhalak Dikhla Ja 10 (17 September 2022), Amruta Khanvilkar and her skipper Pratik dance to the song “Tujhme Rab Dikhta Hai'' in the 'Family Special' episode.

They are seen wearing Anarkali costumes with matching turbans, doing acrobats, and shocking everyone with their moves.

Amruta dedicates this performance to her mother and gets emotional talking about her.

The recent promo of Jhalak Dikhhla Jaa 10 (17-09-2022) also shows Maniesh Paul entertaining the viewers with his funny dialogues in between the dance performances.

© Copyright serialsindia.com, 2018, 2019, 2020. All Rights Reserved. Unauthorized use and/or duplication of this material without written permission from serialsindia.com is strictly prohibited.
Cached Saved on: Saturday 28th of January 2023 12:58:30 PM