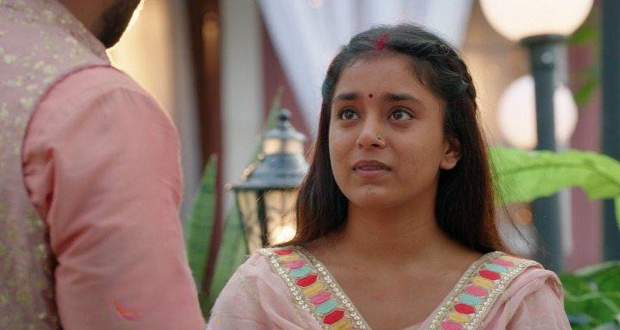 Today's Imlie 2nd September 2022 episode starts with Aryan feeling confused as to why Imlie was interrupting and cutting Sweet’s (Cheeni’s) replies by putting her hand to muffle Cheeni's voice.

Since Aryan doesn’t remember whatever happened him and Tamarind, Imlie doesn’t want Cheeni to utter something that can cause conflict in Aryan’s mind.

Getting concerned, Imlie checks Cheeni’s temperature but it comes out to be normal.

Cuddling Cheeni close to her and stroking her forehead, Imlie makes Cheeni go to sleep.

The next morning, Cheeni’s temperature raises and she starts vomiting.

Imlie has to rush Cheeni to a hospital immediately.

It is early in the morning and without informing anyone, Imlie takes Cheeni out.

Only Malini sees Cheeni and Imlie and she decides to follow them.

However, Malini gets confused when they reach the hospital.

Concerned and in a rush, Imlie asks the nurses to immediately treat Cheeni who has become light headed and a little unconscious due to constant vomiting.

The nurse wait no time to admit Cheeni and inform the doctor about her health while Imlie covers her face, praying that Cheeni becomes healthy in no time.

© Copyright serialsindia.com, 2018, 2019, 2020. All Rights Reserved. Unauthorized use and/or duplication of this material without written permission from serialsindia.com is strictly prohibited.
Cached Saved on: Wednesday 1st of February 2023 10:07:41 PM