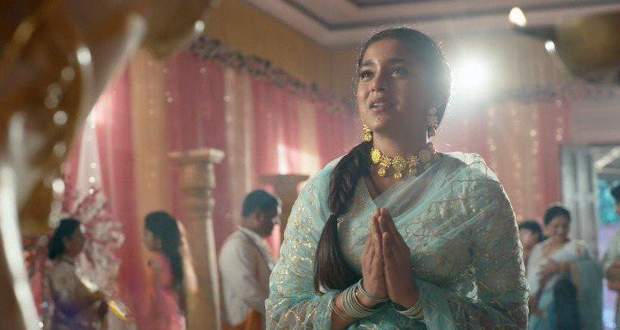 Today's Imlie 17th September 2022 episode starts with Rathore's happiness being over the moon with the arrival of the newborn baby. The preparations for the naming ceremony are animatedly going on.

It is a doubly happy occasion for the Rathore's as they are not only naming the newborn but officially are naming Cheeni as Imlie and Aryan's daughter.

Imlie, feels satisfied and joyous as she seeks Sita Maiyya's blessings, and asks that She should bless Choti (newborn baby) and Cheeni in the same way.

Meanwhile, Malini has suffered a major blow and Anu suggests starting anew. Malini says that she will start fresh, once she lets go of the past with a blast, quiet literally.

As Imlie and Aryan sit down for Pooja before the naming ceremony, Malini sneaks in with a determinantand cunning look on her face, hiding behind her dupatta.

When she witnesses Rathore's being emotional over the baby, her inner voice sarcastically tells Imlie that as the baby's aunt she must give her niece a gift.

Malini then proceeds to plant a bomb under one of the tables and silently leaves thinking about her final evil stroke.