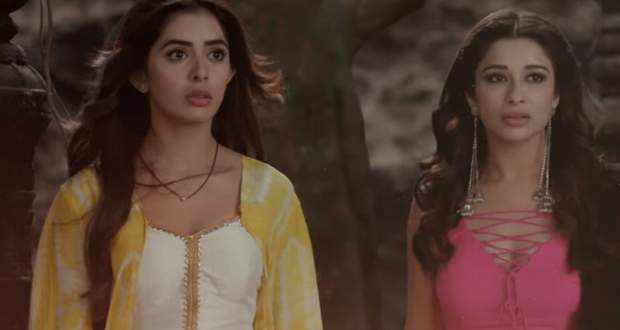 The Divya Drishti 8 Dec episode begins with Vicky starts turning into a werewolf while Ojas Chachi questions him. He goes out in the jungle and turns into a werewolf.

Divya and Drishti search in the jungle and can hear weird noises. Vicky follows them but later hides. They return home and search for the shadow they saw in the book.

Mahima wants Vicky to get married to Divya while later Drishti sees in her vision that Divya is running in wedding clothes and some animal is following her.

They want to tell Rakshit about the shadow but instead decide to bring proofs first from the cave. Shikhar has realized his real identity and wonders why he was in hell.

Later, Divya and Drishti fly to the cave and hear animalistic voices there. They also find handprints and deduce a light produces upon touching it.

Divya and Drishti return home and learn Shergills are talking about Vicky and Divya’s alliance. Drishti opposes Shergill's decision and also gets in an argument with Rakshit.

Shikhar wishes to talk to Divya and later finds some hair outside his room. He finds Vicky running away and gets suspicious.

He learns that Divya is getting married to Vicky and gets upset. He confronts Divya but she wants to know if he has feelings for her.