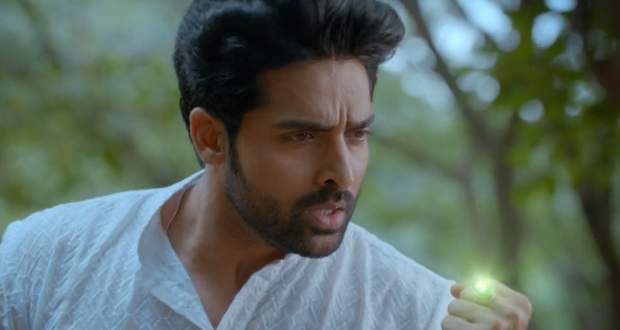 Later, Mahima is turned into ice by Patali and warns she will turn everyone into ice. Meanwhile, Rakshit feels a strong connection with Chetain and sees a light on his finger.

The Rahasya Tara tells Divya and Drishti about Trishakti being the only way to beat Patali. At the same time, Patali tries to turn Rakshit into ice but fails.

Rakshit also finds a ring and feels connected to Chetan. Meanwhile, Divya and Drishti save the Shergill family from Patali’s havoc.

Pishachini turns Patali into a baby again while Chetan’s condition gets critical. He says his last words to everyone in the house and also talks to Rakshit.

He asks him to take care of the two as he is the protector. Later, Divya attacks Patali and tortures her in the same way as she did to Chetan.

Drishti also joins in to fight the evil mother and daughter duo. Romi also comes and thinks he can fight Patali but is turned into ice.

Rakshit performs the last rituals of Chetan and wonders who he needs to protect. He puts on the ring and regains his memories of his old life and marriage.

Divya and Drishti wonder about the third Shakti while Rakhit returns home and recognizes Mahima as his mother.

The written episode of Divya Drishti upcoming update: Divya and Drishti decide to find Patali’s weakness while Rakshit is about to attack Pishachini.