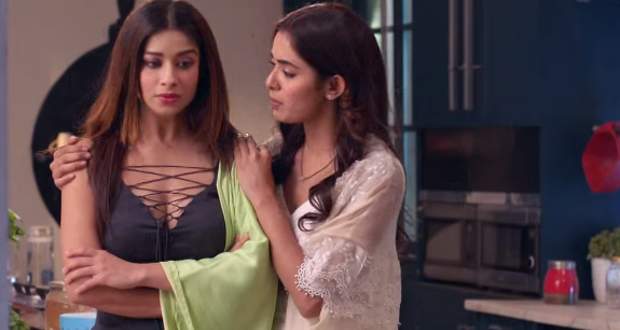 The Divya Drishti 5 Jan episode begins with Divya and Drishti having a conversation about Shikhar and Rakshit being changed. Divya is shocked to see Rakshit working for a party while Drishti knows they are fake.

Pishachini and Chikki arrive along with two sets of fake Rakshits and Shikhars and reveal their plan. They give them time until midnight to identify the real ones.

Meanwhile, the Shergills at home is scared to see multiple Shikhars and Rakshtis. Divya and Drishti also arrive home and Laal Chakor declares he will turn one Shergill into a vegetable if any Rakshit and Shikhar are destroyed.

Later, Divya destroys a Shikhar for mistreating Simmi and she is turned into a tomato by Pishachini.

Later, fake Shikhars and Rakshits start beating Romi and Divya and Drishti feel helpless. At last, they destroy all fake copies while Pishachini turns Aish into an orange.

They all get ready for the party and start dancing. Divya and Drishti have a plan and switch on special lights that pass through Rakshit and Shikhar.

All of them turn out to be fake while Drishti finds the burn mark on the photo of Shikhar and Rakshit. Divya destroys the fake ones while Drishti saves real Rakshit and Shikhar.

Aish and Simmi also turn into their original state. Later, Rakshit is upset with Drishti for always being with Divya.

The written episode of Divya Drishti upcoming update: Drishti sees in her vision that Divya enters the cave and dies.